She learned what happened in a text 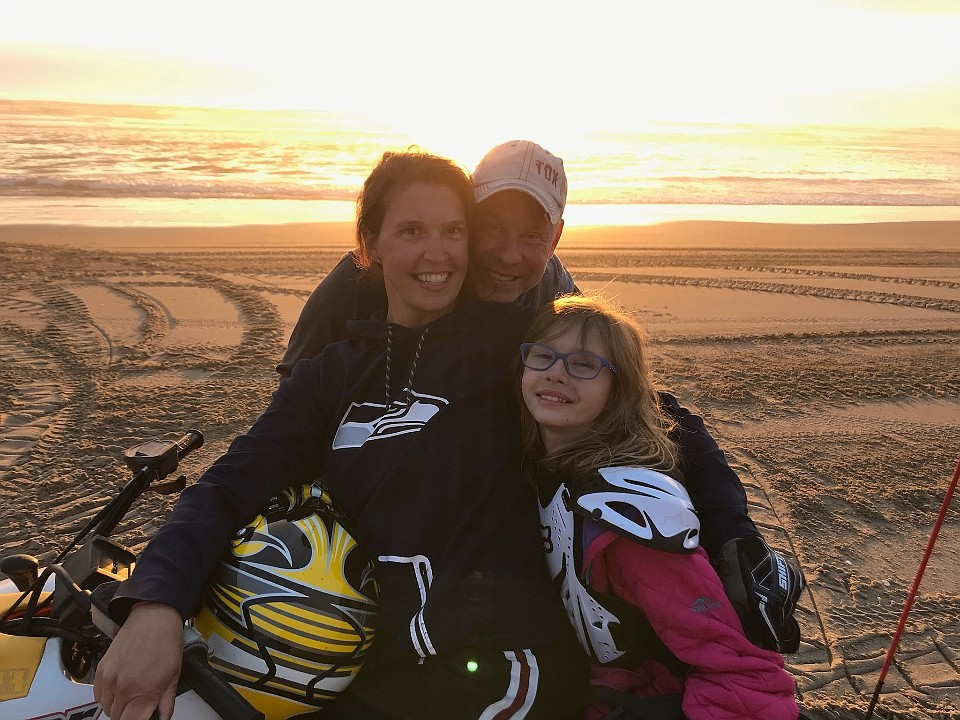 Tawsha and Jason Thompson of Lynden with their youngest of three daughters. Jason Thompson was one of two Whatcom County Sheriff's deputies shot last week answering a disturbance call in Peaceful Valley. (Photo courtesy of the Thompson family)
By ELLIOTT ALMOND
CDN Contributor

The text said what Tawsha Thompson knew could happen every time her husband left their Lynden home for work.

“I knew ... right away,” Tawsha Thompson said Tuesday, speaking about the ordeal in which two deputies were shot in the head Feb. 10 after answering a call about a neighborhood dispute in rural Peaceful Valley.

Tawsha, who had spent 25 years with the Bellingham Police Department, was relieved her husband was alert enough to text her.

“If someone in uniform comes to your door…” she said, letting the rest of that image remain unstated.

The mother of three dropped off her middle school-aged daughter and drove to Bellingham's PeaceHealth St. Joseph Medical Center to be with Thompson.

He and fellow deputy Ryan Rathbun were transported to the Bellingham hospital after suffering head wounds from blasts of a shotgun by a man who police say was irritated by smoke from a neighbor’s backyard trash fire.

Joel Berck Young of Maple Falls was charged with two counts of attempted murder in the first degree and booked into Skagit County Jail with a $5 million bail.

“What was going through this guy's mind to do what he did, I don't know,” Tawsha Thompson said.

Both deputies have been released from the hospital and are expected to make full recoveries, family and friends said.

Tawsha Thompson said walking into the emergency room with law enforcement officers swarming the place was overwhelming. Her husband was getting a CT scan when she arrived.

“I wanted to get eyes on him,” Thompson recalled. “It was a matter of holding it together until I saw him.”

She felt relief when Jason Thompson breathed normally and talked to her.

Jason Thompson, a 13-year veteran of the sheriff’s office, suffered injuries to the nose and an eye, his wife said. His vision is improving, Tawsha Thompson added.

She said Jason Thompson wants to return to his job “but what we need to do is get to 100%” health.

As law enforcement officers, the Thompsons know the risks of their jobs. The couple met working Honor Guard to attend services of fallen officers.

“We were very aware of the risks,” said Tawsha Thomspon, who grew up on a Lynden dairy farm. “I’ve had to make those notifications to family members.”

The couple makes a point of saying “I love you and be safe” when walking out the door, Tawsha Thompson said.

She left the Bellingham Police Department in December. Now Thompson is a Republican candidate for the state House of Representatives in the 42nd district, which includes north Bellingham and north Whatcom County.

“I’m so proud of how they put themselves aside to keep the community safe,” Thompson said of the wounded deputies. “Our jobs have been so politicized. This is restoring our faith.”

Tawsha Thompson described the deputies as highly skilled officers who had been well trained for such a scenario. But authorities never know what they might encounter on a call, she said.

“When it does happen it is shocking,” said Tawsha Thompson, a former sergeant in charge of the special victims unit. “It will always be that.”

She also praised armed Peaceful Valley neighbors who dragged the wounded deputies into a garage and administered first aid until paramedics arrived.

“Who knows what would have happened if those good samaritans didn’t have guns,” she said.

Tawsha Thompson said she has learned to compartmentalize her emotions to stay strong for her husband and daughters, two of whom are in their late 20s.

“At some point, you have to allow yourself to let it out,” she said.

The tears came briefly Tuesday when Thompson thanked the community for its outpouring of support that has included strangers stopping by with cards and gifts being dropped off at the sheriff’s office.