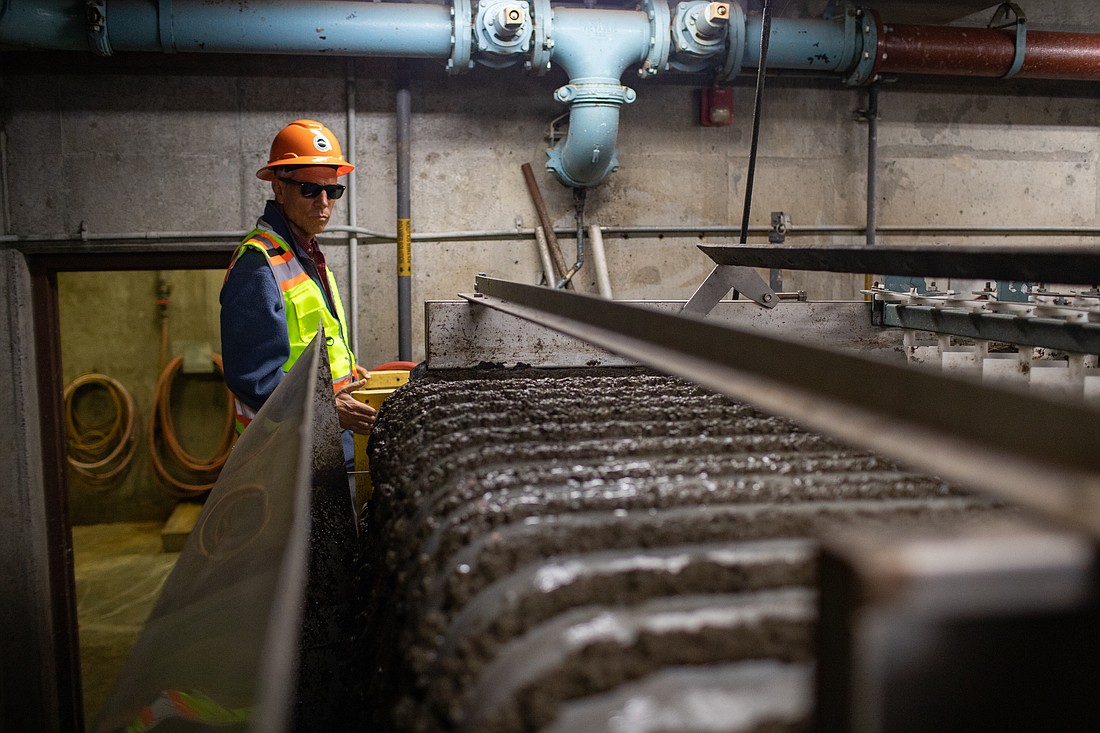 Disproving the widely held theory that it's impossible to look cool while watching the flow of human waste, Bellingham Mayor Seth Fleetwood chills near a gravity belt sludge device at the Post Point wastewater treatment plant in July 2022 — a month that will go down in Mayoral Sludge Photography history. (Hailey Hoffman/Cascadia Daily News)
By RON JUDD
Executive Editor

Many years ago, on a Really Slow Day at the Hammer’s previous begrudging place of paycheck issuance, The Seattle Times, a few of us newsies came up with a questionable idea that remarkably stood a long test of time: An annual Dubious Achievement Awards spread in the Sunday magazine that had some fun with newsmakers from the previous year in a tongue-painfully-implanted-in-cheek sort of way.

Due to fortuitous news timing, these awards became known as the “Feats of Clay Awards for Distinguished Lack of Valor,” named in dishonor of Clay Bennett, the jar-headed, duplicitous ratfish who in 2006 stole the Sonics from Seattle and moved them to Oklahoma City, where everything goes to die.

This was a lot of fun for us, and (some) readers seemed to like it. Years later, with the birth of Cascadia Daily News, the transplanted Hammer was tempted to recreate the tradition — this in spite of us not having a Sunday magazine, and the author being a bit older and lazier.

But shoot, none of those things have stopped the Hammer before, so on we go. As we seal the acid-free envelopes, please enjoy, or angrily respond to via letter to the editor, the inaugural CDN Red Hammer Dubious Achievement Awards, a fine local tradition for a good one-hundredth of a century:

The “My (Poop) Future’s So Bright, I Gotta Wear Shades” Award: To Hizzoner Seth Fleetwood, who for still-unknown reasons made himself available to be photographed watching the city sewage, um, wheels of progress rolling by in Bellingham’s wastewater treatment plant, reputedly prompting a high-level CDN editor, upon viewing the resulting image, to remark: “We cannot run that photo often enough.”

The Read Some History, Kids Award: To all our younger staffers who stared blankly when said editor proclaimed said photo to be a slam-dunk winner in any good Dukakis-In-Tank photo contest.

The Streetside Meter Theatre Sleight of Hand Award: To the city of Bellingham, which for a solid half-year kept ringing up parking tolls for an hourly street-parking system that had absolutely no enforcement.

The Please Start Your Own Fair If You Don’t Like the Trump-et Sounds Award: To the Northwest Washington Fair in Lynden, which responded to complaints about unhinged right-wing banter by a rodeo announcer by suggesting future customers just cover their ears or stay home.

The “Privacy Laws Prevent Us From Discussing Privacy Laws” (Public Non-Accountability Division) Award: To Bellingham Public Schools, for reasons that should be obvious, except to explain them would risk violating privacy laws.

The Bob Woodward You-Gotta-Show-Up Award: To accidental former state Sen. Simon Sefzik, the only local pol in the 2022 midterm election (including a sitting congressman) who couldn’t find time to sit down in person with CDN’s editorial board for a candidate-endorsement interview, thus winding up with a photo of his face on a laptop in the newspaper’s Voter Guide. On the other hand: It did make him stand out.

The Gracious in Defeat Award: To the aforementioned Simon Sez, who displayed the humility and respect for the common good (sadly, rare these days among his GOP peers) of conceding a tight election contest against Sharon Shewmake and then urging a coming together of constituents. Asked about his future plans, Sefzik then deadpanned, “Unemployment?”

The “Where Packages Go To Die” Award: To FedEx Burlington, where packages go to … well, you know.

The 20 Years Later, We Still Don’t Have a Single, Solid Idea Award: To Western Washington University, which struck a blow for lack of imagination and administrative dysfunction by walking away from a long-reserved role in redeveloping Bellingham’s central waterfront.

The “You Say Permanent Pump Track Like That’s a Bad Thing” Award: To the Port, which almost two decades later has the track, some condo footings and a couple streets to show for the rebirth of what should be the city’s next-gen showcase.

The PR-Iceberg-Dead-Ahead! Award: To the same elected body, which, history shall forever reflect, came fairly close to making its Next Big Thing development down at the waterfront a luxury hotel called “Titanic.”

The Will the Last Person at Macy’s Please Turn Out the Lights Award: To Bellis Fair mall.

The Please Keep Forking Over That Cash While We Threaten to Sue Taxpayers With Their Own Money Award: To commissioners on the board of the Chuckanut Community Forest, all of whom need a new hobby.

The P.T. Barnum Memorial Trust Us, This Really Will Work Award: To all the players in the proposed restart of the Ferndale Intalco aluminum smelter — a noble goal that never could have worked without massive public subsidies in the form of cut-rate public power, which (surprise!) ultimately failed to materialize, in spite of promises all around.

The International Relations Missed Opportunity (Donut Division) Award: To the once-great nation of Canada, which failed to act promptly on an ingenious suggestion made on this page to trade the jurisdictionally challenged Point Roberts community for the price of one Tim Horton’s franchise located in Whatcom County.

The If You Feel the Need to Constantly Call Something “Iconic,” It Probably Isn’t Award: To city boosters who keep attaching that prefix to the wholly unimpressive, diamond-snot-coated Acid Ball in Waypoint Park.

The Paul Blart Memorial Civic Center Security Award: To the COB, which, facing an ongoing shortage of cops, fielded private security teams (sadly sans Segways) on the sidewalks of trouble spots such as Railroad Avenue, with mixed success.

The Pause For Creative Re-Imagineering Award: To the aforementioned Fleetwood, reeling furiously back on taxpayer-funded projects such as an ill-defined Climate Action Fund and a monstrously expensive sewage treatment plant revamp, both of which were arguably out in front of their skis on a black-diamond slope on the north face of Trust in Government peak.

The (Truly Sincere) Thanks For the Buzzkill Award: To those foam-suited state folks who trapped, vacced and sealed up what we hope will be the last of those big bee-beheading hornets up around Blaine. For clickbait news purposes, the murder hornet era was fun while it lasted, but …

The Wash-That-Mouth-Out-With-Soap Unfortunate Clarity in Language Award: To Eric Johnston, Bellingham’s public works manager, who in the process of describing an expensive public-relations “outreach” program for a plant we always assumed focused on intake, uttered the soon-to-be-immortal words: “Fortunately, we don’t eat biosolids.”

The Speak For Yourself Award: To city pooches, who heard the above and then, according to sources, thought: Speak for yourself, friend!

The (Sincere) Thanks For Brightening Dark Days Award: To the WWU women’s basketball and soccer teams, who soared to championship heights and did the Northwest corner proud on a national stage. Special Hammer nod to the sideline leaders, coaches of the year Carmen Dolfo and Travis Connell, who know a good place when they see it.

And Finally, The Thanks For the Memories Award: To early adopting readers and friends of CDN, who make our work, our mirth and everything else possible.

The Hammer is swung on Wednesdays, or when snow flies.