'This is not fair, it’s not right and it shouldn’t be right like this' 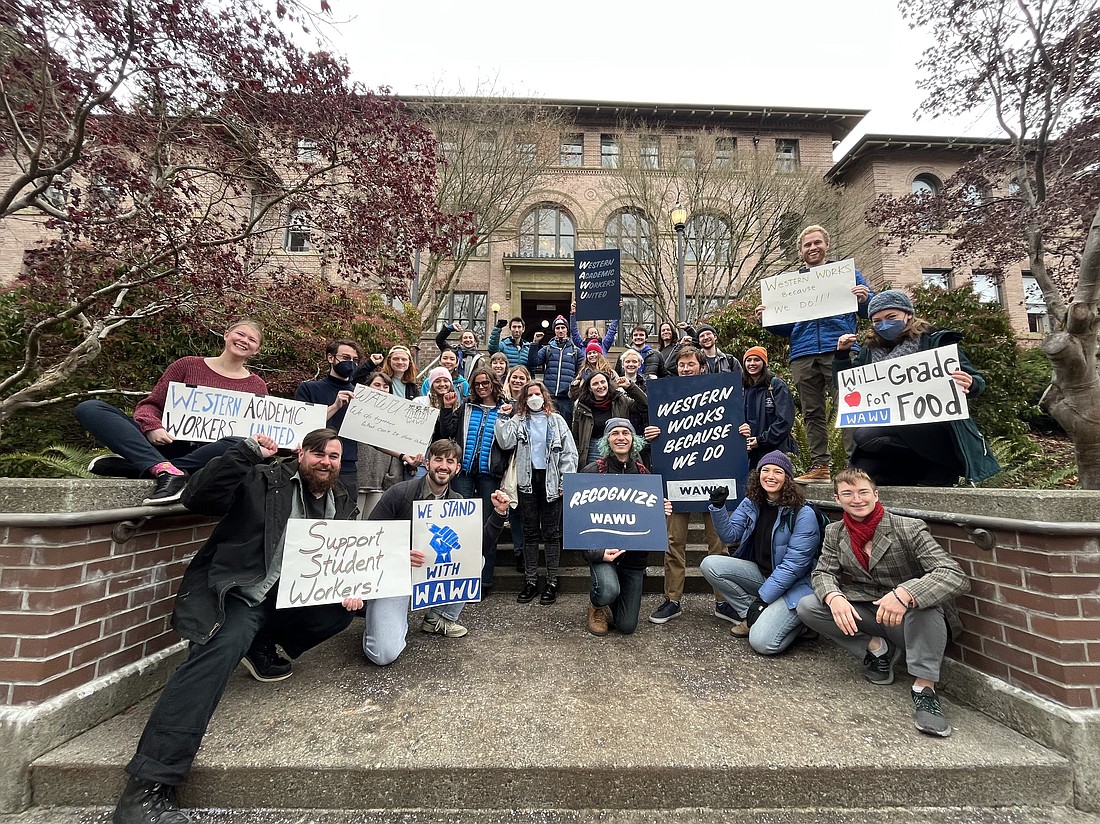 When Lexy Aydelotte finished her undergraduate degree in history at Western Washington University, she figured the smart next step would be to earn her master's degree in the same spot. She secured a teaching assistant position in the department, which provided a tuition waiver and a stipend of about $5,000 each quarter.

Aydelotte, who commuted from Lopez Island, quickly realized the stipend would not cover her bills, so she kept her job as a paraeducator in the school district on the island. Each week, she would work on the island, commute to Western, teach, grade, take her own classes and do her history homework late into the night.

In January 2021, Aydelotte developed Bell's Palsy, in which half the muscles in her face drooped, causing her speech to slur and preventing her from being able to fully smile.

Aydelotte said her job on Lopez Island was unionized and immediately secured paid family medical leave for her while she recovered. Western, on the other hand, told her to keep working or she would lose her teaching assistant position and, therefore, her quarterly stipend and tuition waiver. Aydelotte's "disability accommodations" were to teach her Zoom classes with the camera off to hide her drooping face from the group of undergraduate students she taught in winter and spring quarters that year.

"That was my turning point with Western," Aydelotte said. "I felt that this is not fair, it’s not right and it shouldn’t be right like this."

While Aydelotte has regained control of the muscles in her face, she has not recovered her belief that the university cares for its students.

After about a year of quietly organizing with other frustrated teaching assistants, tutors and researchers, Aydelotte and other Academic Student Employees (ASEs) went public with their effort to unionize in September. They quickly gained support and a supermajority of the more than 700 ASEs on campus signed authorization cards to create the Western Academic Workers United through the United Automobile, Aerospace and Agricultural Workers of America. On Dec. 2, the group filed for recognition with the Washington Public Employment Relations Commission and submitted a letter of intent to the university.

"We obviously are very interested in finding solutions that will practically work for the university, but I think that can be done most successfully by having a seat at the table," said Willa Rowan, a graduate student, teaching assistant and a union organizer.

Rowan said she came to Western to study geoscience education with an adviser whose research aligned with her interests. She took a teaching assistant role to gain experience in instructing. However, she said she quickly found the university wasn't providing adequate support and decided to take action when she learned how many of her classmates were selling plasma to get by.

"One way to achieve equity and inclusion would be to pay student workers a living wage." — Willa Rowan, Western graduate student and teaching assistant

Right now, the union's goal is to be recognized and to negotiate its first contract. In the long run, it hopes to improve salaries for students, improve health care benefits, increase job security, create clearer guidelines for positions and workloads, and create more protections for graduate teaching assistants, researchers and undergraduate tutors.

"I found pretty soon that the stipends we receive as graduate student employees were just not cutting it," Rowan said. "Some of [my classmates] experience food insecurity. For a lot of us, a large portion — you know 60% or more — of our paychecks goes towards our rent."

Graduate students receive about $5,000 per quarter and undergraduate students are paid an hourly minimum wage not exceeding 19 hours, union organizers said. ASEs can receive health insurance, but it goes dormant over the summer unless a student snags one of the few, competitive positions available, Rowan said. The health benefits also do not cover vision or dental. Teaching assistant positions are also not guaranteed positions quarter to quarter, meaning graduate students might suddenly be out of work and without a tuition waiver.

Aydelotte, Rowan and other union organizers believe graduate students shouldn't have to work three jobs or rely on financial support from their families to earn a degree.

Western employees' union efforts followed shortly after student workers at Washington State University and several other universities around the country unionized. ASEs at the University of Washington unionized more than 20 years ago.

Currently, two state laws (RCW 41.56.203 and 41.56.205) codify the right to collective bargaining at the University of Washington and Washington State University. Aydelotte said their union plans to propose that ASEs at regional universities, like Western, have the same rights in the upcoming legislative session.

Aydelotte and Rowan said they've received tremendous support from other students and several of the other campus unions. They've also found community among students in other departments whom they would not have otherwise interacted with.

"Being able to talk to people who are dealing with really similar things [shows] there is a campus-wide demand for more accountability from Western and transparency in our employment status," Aydelotte said.

The union is currently waiting on recognition from the university and the Public Employees Relations Commission.

Western did not respond to a request for comment.

A previous version of this story incorrectly named Lexy Aydelotte. The story was updated to reflect this change on Dec. 20, 2022 at 3:50 p.m. The Cascadia Daily News regrets the error.