Longtime ensemble brings the party with them 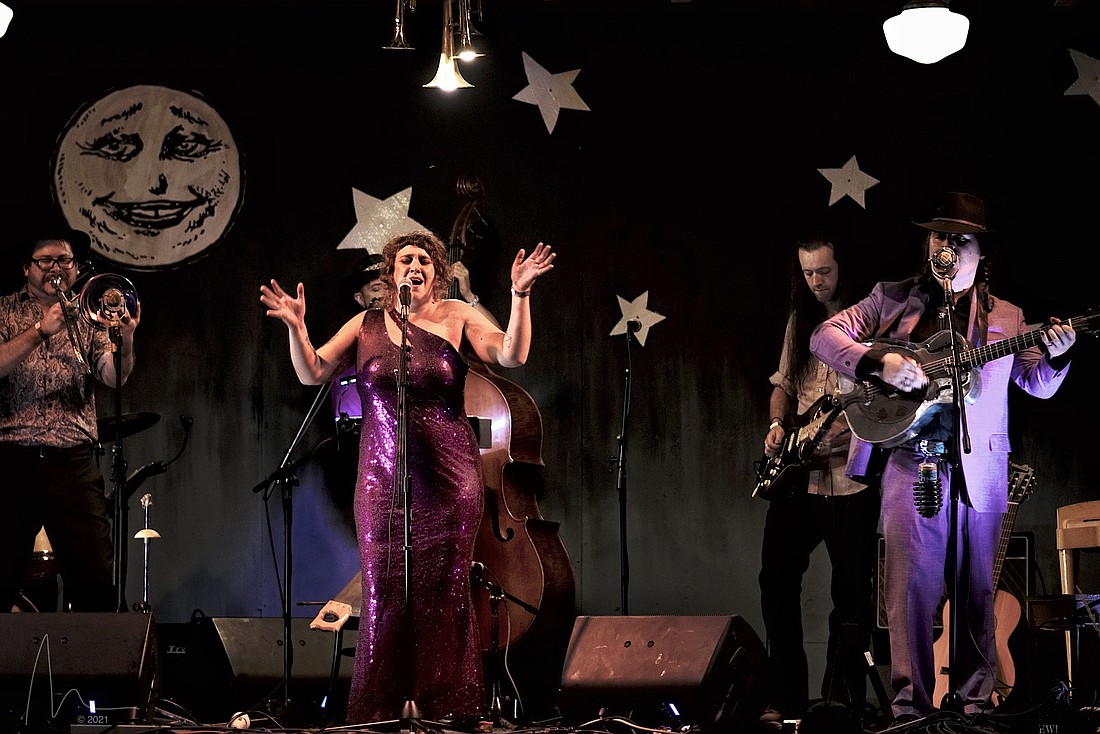 Hot Damn Scandal, formed by bandleader Pete Irving as a sort of busking collective, has established itself as one of Bellingham’s most popular bands. Hear its distinctive blend of blues, vintage jazz, folk and Americana at a show Saturday, Dec. 17 at the Wild Buffalo. (Photo courtesy of Marc L'Esperance)

Hot Damn Scandal have been around in different iterations for almost 15 years. Originally formed by bandleader Pete Irving as a sort of busking collective, the band has gone through a bunch of lineups, recorded three albums, toured extensively and established itself as one of Bellingham’s most creative and popular bands.

Their sound is a distinctive and unpredictable blend of blues, vintage jazz, folk and Americana, tied together by Irving’s gritty vocals and cynical, absurdist lyrics. They’re playing a big show Saturday, Dec. 17 at the Wild Buffalo, and celebrating the release of their recent album, “Live from the Apocalypse.”

The current lineup of the band includes a rotating crew of drummers, bassist Mickey Stylin, Kris Staples-Weyrauch playing electric guitar, Jane Covert-Bowlds on sax, trombonist Jimmy Austin, and Ani Banani on musical saw and vocals. Irving sings most of the lead vocals and plays resonator guitar. Banani and Irving also have a duo called The Best Intentions, and Banani leads her own group, Bang Bang and the Bad Medicine, who will be opening the show on Saturday.

If you’ve ever been to the Sh’Bang! festival at the Lookout Arts Quarry, you might recognize that group as the house band for the Saturday night burlesque shows. This weekend's gig will also feature burlesque performances scattered throughout the evening, with performers including Dame SinCyr from Portland, as well as local talents Patricia Charms, Cybele, Kalamity, and Emerald Fire.

Hot Damn Scandal have headlined the Subdued Stringband Jamboree several times, so if you’re someone who looks forward to that event every year, this album might be a way to help fill the gap. They were going through a bunch of live recordings trying to find something to put out when they realized the entire set they performed as the band’s contribution to the all-online 2020 edition of the Jamboree had been strong enough to stand on its own as a live release.

At the time it was recorded, they were, like many musicians, struggling with the shutdown of live music. Even though the audience for the album was just the technical crew for the broadcast and some members of the other bands, that was enough to get them fired up for a memorable, high-energy show. Irving and Banani do all the band’s graphics with cut paper and created a great cover for the album in that style. They’re also hoping to have some cool new shirts ready in time for the show.

Looking forward, the band has another big collaborative performance planned for the Bellingham Circus Guild in March. After that, they are heading out on a tour and hoping to get a new studio album recorded to document a bunch of new songs and a steadily evolving sound.