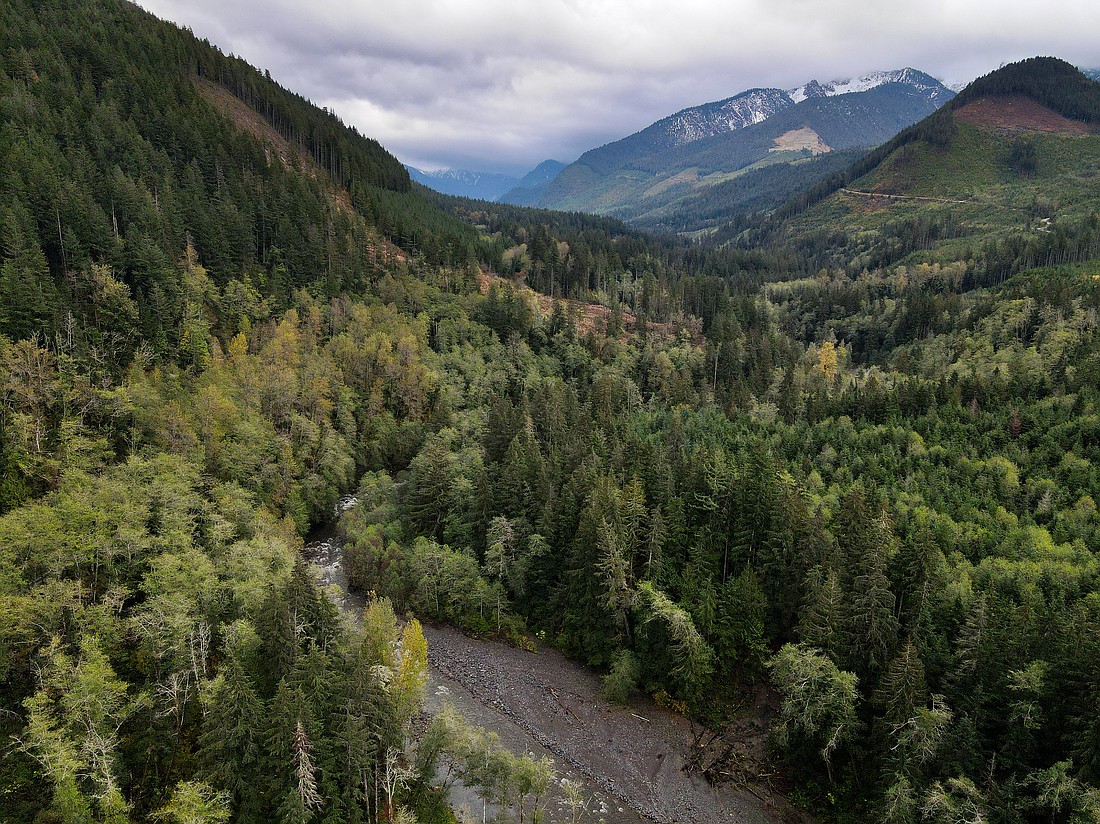 Trees surround Clearwater Creek outside of Deming. The Washington Green Amendment, which seeks to protect and conserve the state's natural resources, is expected to be reintroduced in the 2023 legislative session. (Hailey Hoffman/Cascadia Daily News)
By JULIA LERNER
Staff Reporter

The Washington Green Amendment will be back on the table in 2023.

The amendment, initially proposed in the Washington Legislature in 2021 by 40th District Rep. Debra Lekanoff, calls for a legal right dictated in the state constitution to protect air, water, environments and community health across the state.

The amendment proposes adding a new section to Article I of the constitution.

“The people of the state, including future generations, have the right to a clean and healthy environment, including pure water, clean air, healthy ecosystems and a stable climate, and to the preservation of the natural, cultural, scenic and healthful qualities of the environment,” according to House Joint Resolution 4205. It goes on to say the state will serve as a “trustee” of Washington's natural resources.

Lekanoff, an Indigenous Democrat who recently won her reelection bid against a write-in opponent, introduced the amendment in 2021 and then reintroduced it in 2022.

“I believe this amendment is a foundation that generations of lawmakers can build upon to ensure we make decisions that reflect a prosperous economy and a healthy environment,” she wrote in 2021. “This bill is not to hinder growth, the economy or jobs, it is to respect the history of Washingtonians who made decisions to preserve and honor, and to ensure our generations to come can enjoy a clean environment and healthy natural resources.”

During the 2021 and 2022 sessions, the proposal gained significant support and had 13 cosponsors, including Lekanoff’s counterpart in the 40th District, Democrat Alex Ramel.

“It’s like a statement of intent and purpose,” Ramel said Monday, just one month ahead of the beginning of the 2023 legislative session. “It requires a supermajority vote rather than a simple majority vote, which means the threshold to get it through the Legislature is higher.”

In order to amend Washington’s Constitution, the Green Amendment will require a two-thirds majority vote in both houses of the state legislature, and then will be passed on to voters during the next election.

“A right to protection of the environment is, I think, an important right,” Ramel said, “but how that right is protected would still have to be defined.”

Though Washingtonians already have significant environmental protections across the state, activists call this amendment necessary for future generations and for closing existing regulatory loopholes.

“Washington may have a very good, robust set of environmental protection laws, but there are still problems in the state,” said Maya K. van Rossum, the founder of Green Amendments For The Generations, a national nonprofit pushing green amendments across the country.

“We still have people drinking contaminated water, breathing polluted air. We still have critical ecosystems that are being harmed. We do still have climate-changing emissions being released into the air. There are issues that Washington state faces, just like every other state,” she added.

“In the law, there are a lot of gaps,” she said. “Washington, like every other state, has had a problem when it comes to regulating PFAS chemicals, for example. They are in the environment because of a lack of protections.”

Rossum said she has worked with communities and activists across the state, including Lekanoff, to support the passage of a green amendment.

So far, only three states have ratified a green amendment: Montana, Pennsylvania and, most recently, New York.