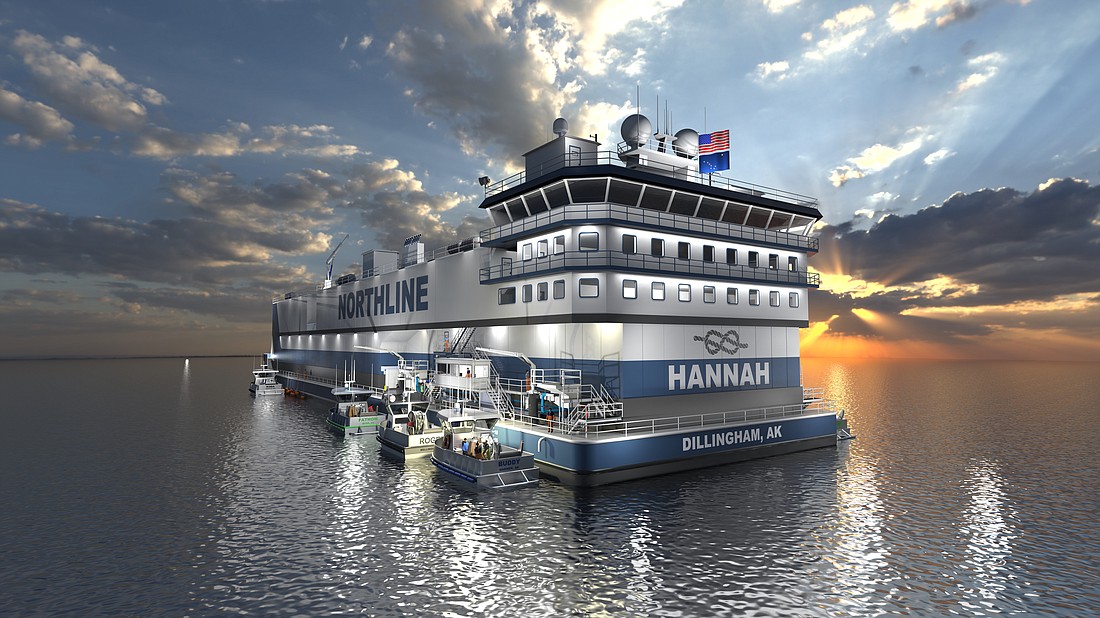 Hannah, a brand new, "one-of-a-kind" fish processing vessel, will be built in the Port of Bellingham early next year. (Image courtesy of Northline Seafoods)
By JULIA LERNER
Staff Reporter

A “one-of-a-kind” salmon-processing vessel will be built in the Port of Bellingham early next year.

Construction on the Hannah, designed and developed by the Alaska-based Northline Seafoods, will begin in January, with plans to launch the $60 million project in early 2024.

The company selected Bellingham for construction due to its location at the beginning of the Alaska Marine Highway, as well as the region's robust maritime industries.

“It’s really great for our working waterfront,” he said Monday.

The vessel, Northline representatives said, will bring a totally new way to process fish to Alaskan waters, with a significantly smaller environmental footprint than traditional processors.

The fuel-efficient boat should allow the company to save "hundreds of thousands of gallons of diesel every year just on the shipping and storage" of fish to be processed, said Benjamin Blakey, Northline’s CEO.

Northline estimates Hannah will be able to save as much as 217,000 gallons of diesel per year, compared to typical fish processing and transportation methods. Blakey said the vessel will also generate less waste, as the entire fish will be frozen and used, minimizing the need for plastic packaging.

“We get full utilization of the fish: all the heads, the guts, the frames, everything, so we get maximum recovery and value out of that,” he said. “It produces a higher-quality product and actually saves money in the process.”

The company primarily processes Alaskan salmon in Bristol Bay, a major fishing hub in Southwest Alaska. Northline has been working to improve the sea-to-sale model of processing for several years. Blakey, who has spent his entire life on fishing and processing vessels, is constantly seeking improvements.

“I think Whatcom County is home to the largest concentration of Alaskan permit holders outside the state of Alaska, so there’s dozens of fishermen that live in the county,” Blakey said. “We buy from small businesses, folks who run their vessels up in Bristol Bay.”

The fish, processed on the floating vessel, will be marketed across the Pacific Northwest.

Northline has been working to improve the sea-to-sale model of processing for several years. Blakey, who has spent his entire life on fishing and processing vessels, is constantly seeking improvements.

“Having been both a fisherman and a processor, you’re always scheming on ways to do things better and more efficiently,” he said. “Hannah is a pursuit to just make the fishery better and to create a more efficient process.”

Over the last decade, sockeye and other salmon populations have exploded in Bristol Bay, contributing to the success of the fisheries in the region. This past summer, the Anchorage Daily News described the 2022 sockeye runs as “the largest in recorded history,” with upwards of 70 million fish. Between 1990 and 2010, comparatively, the bay saw an average of about 37.5 million fish per year, according to the U.S. Environmental Protection Agency.

But salmon runs in the region may not always be so strong, with fisheries across Alaska and the Pacific Northwest struggling or collapsing. Earlier this year, 14 fisheries in Alaska were declared “federal disasters,” meaning the region saw significant declines in salmon populations. Salmon fisheries across the Southeast, the Northwest and inland rivers were declared “commercial fishery failures” by U.S. Secretary of Commerce Gina Raimondo.

Blakey says the Hannah — which shares a name with “somebody important” to the company's investors, as well as the first armored vessel in the U.S. Navy — is designed with possible fishery failures in mind.

“We didn’t build this assuming boom times at all times. This is actually more of a longer-term look at protecting the industry and making sure it’ll be able to withstand some of the shocks,” he said. “There will be [fish population] declines, and that’s when these efficiencies become that much more crucial. If you’re facing lower returns, you’re going to want to get the most that you can out of every pound of fish, and that’s what this is designed to do.”

The floating processor will be built over the next 14 or so months, Blakey said, on the hull of a pre-constructed barge. The 400-by-100-foot barge, currently en route to the Port of Bellingham from the Gulf of Mexico via the Panama Canal, will house a “superstructure” with refrigeration equipment, housing and fish tanks.

Construction costs are estimated to be $60 million, with around $40 million provided to the company via a U.S. Department of Agriculture-backed Food Supply Chain loan, part of the Biden Administration’s “Build Back Better” initiative.

Vessel construction and eventual operation will generate $12 million in construction wages and full-time jobs for Whatcom County, Northline said. The company anticipates bringing on almost 40 full-time employees to operate the Hannah once construction is complete.

This story was updated at 1:16 p.m. Dec. 5 to include additional information.