Helping the literally powerless in Ukraine 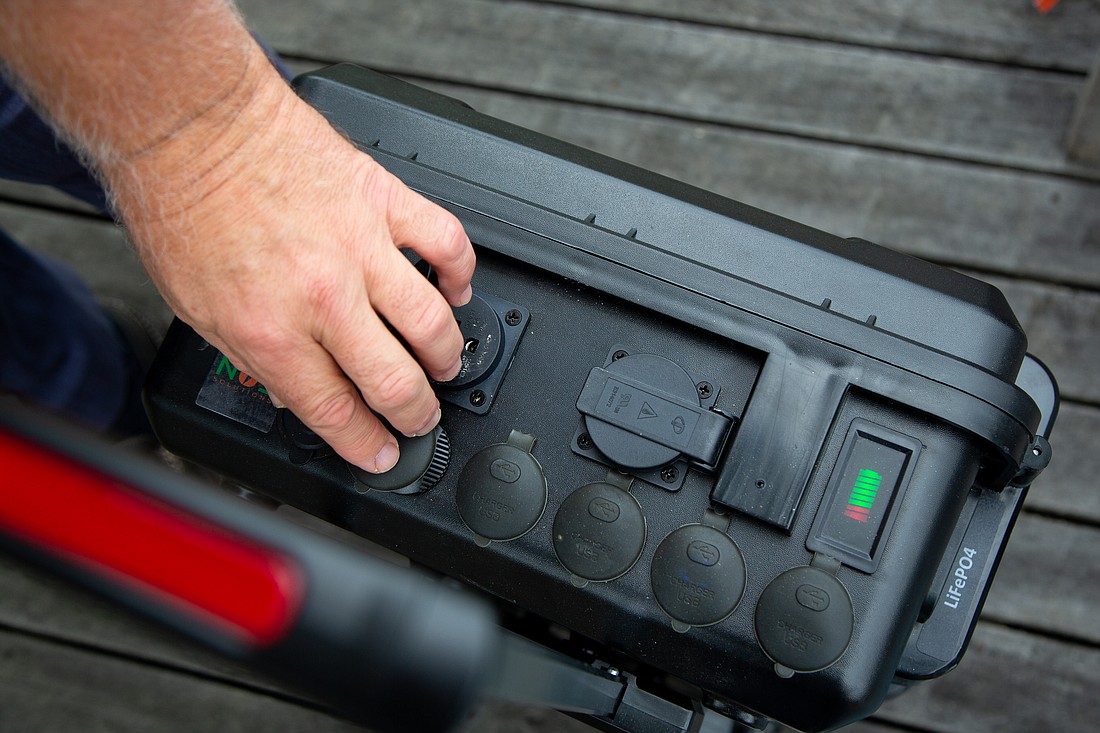 Paul Shmotolokha, chairman and CEO of New Use Energy, opens different plugs and ports on a portable power station housed in a hard-shell roller suitcase at his home in Bellingham on Aug. 26. Shmotolokha, a Ukrainian-American, sends the batteries along with solar panels and other gear to aid humanitarian efforts in Ukraine. (Hailey Hoffman/Cascadia Daily News)

A $4 million conduit. Six months ago, Russia invaded Ukraine. And since that pivotal Feb. 24, a Bellingham-based CEO has been using his personal connections and professional expertise to help humanitarian aid get to areas of Ukraine hit hard by the war.

Paul Shmotolokha knows something about emergency response. He’s chairman and CEO of New Use Energy (NUE), a 10-person startup headquartered in Tempe, Arizona, with a research-and-development and manufacturing office in Anacortes. NUE’s products provide portable solar power through commercial-grade generators and backup systems that have been used in disaster relief efforts across the U.S. 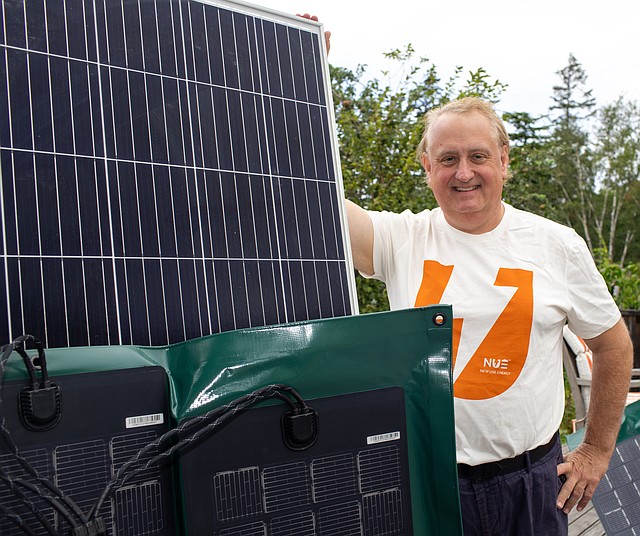 Shmotolokha also knows something — a lot of things — about Ukraine. He’s first-generation Ukrainian-American. He lived in Kyiv after independence in 1992-93. His wife Bohdanna was born in Lviv. Shmotolaka moved to Bellingham in 2003 and in 2019, he co-founded NUE.

The threads of his parallel personal and professional lives intertwined tightly in late February when the war began.

“NUE was not doing business in Ukraine. We were focused on North America,” Shmotolokha said. “We had to rally. Within 12 hours of the invasion, I set up two networks to funnel in various technology-oriented supplies."

The efforts were as much about getting supplies across borders and raising funds from donors as they were about the usefulness of NUE’s portable power stations on the ground.

“We didn’t just do power projects, we used our connections to help a lot of other groups that wanted to donate their items such as high-tech surgical headlamps, solar reading lamps, IT equipment, etc.,” Shmotolokha said.

By mid-August, he estimated he and his contacts had been involved in distributing more than $4 million worth of goods in concert with established aid organizations, including iPads for children in hospitals and a “long list” of medicines. 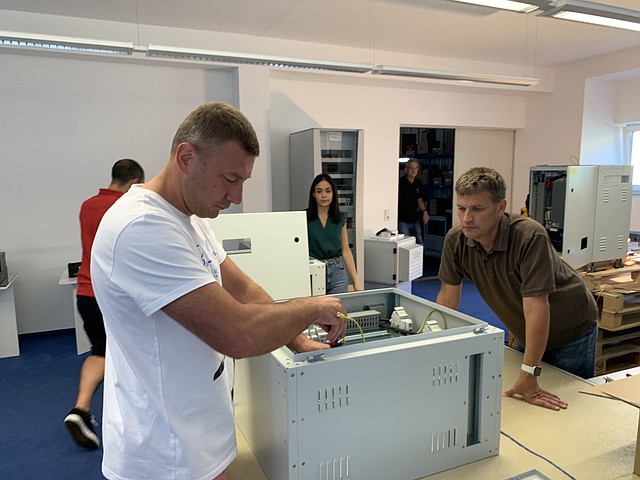 Volodymyr Dvozhak of NUE partner Tavido LLC from Lviv working on a portable solar generator. It's one of many units NUE has on the ground in Ukraine, in coordination with aid organizations. (Photo courtesy of Paul Shmotolokha)

“The hospital got hit by two rockets,” he said, and only had intermittent power. “We actually had the equipment en route when it was hit.”

The equipment was a new solar uninterruptible power supply, or UPS, that NUE had designed and started to build in Germany. Shmotolokha said it could run seven hours without recharging, and 12–15 hours during the day while recharging from solar panels hooked to wires dropped out a window.

After it arrived, Shmotolokha said he was sent a photo from the head of the hospital’s intensive care unit. He saw it was powering a ventilator, patient monitor, electrical suction pump, coagulator, lights, a microscope and more.

“They have petitioned me for 11 more (portable power units) and I’m today writing up the appeals” for funds, he told me. 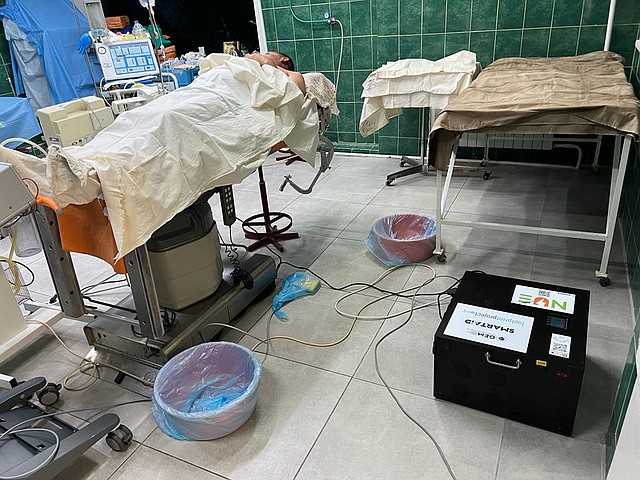 A NUE portable power station in use in a frontline hospital in southern Ukraine. The head of the hospital has requested 11 more, one for each operating room. (Photo courtesy of Paul Shmotolokha)

As a small startup, the value of NUE’s logistics contribution likely far outpaces any cash donations it could directly make. But Shmotolokha figures NUE has provided “probably over $100,000” in time and goods. “We have other donors buy stuff from us as well. But we don’t charge for our time.”

He said more than 100 people have volunteered or otherwise worked on the Ukraine projects, including many inside the country, and coordinated with aid organizations.

“Paul has been helping and supporting SmartAID efforts on the ground since day one,” said Shachar Zahavi, founding director of SmartAID, an international technology aid nonprofit active in Ukraine. “His insights, passion and on-the-ground support have helped us make a huge impact on those living in shelters, schools and health institutions who needed our help the most.”

“The unique part of NUE is that it adapts to the changing scenes in this war and enables us to move their units according to the needs on the ground,” Zahavi said. 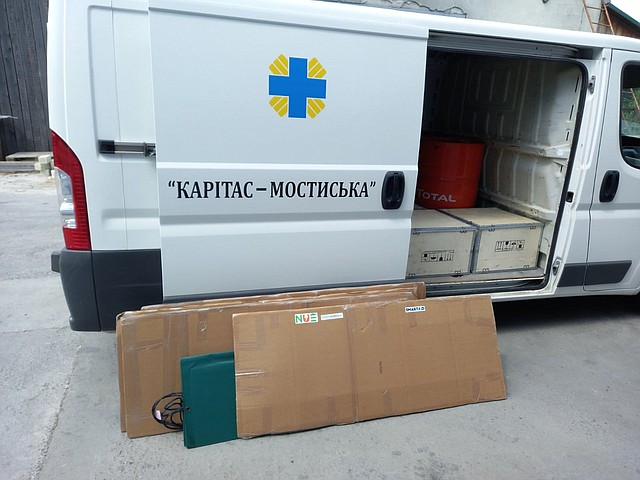 NUE solar panels and portable solar generators are being delivered in Ukraine. The delivery is being picked up by Caritas Ukraine, a Catholic charity, in Lviv. (Photo courtesy of Paul Shmotolokha)

“One of the only reasons we were able to activate quickly for Ukraine is because we had his friends and family on the ground,” Heegaard said. “We’re not sending stuff without clarity on how it will be used, and who’s responsible for it.”

“Having folks in-country that we trust is game changing,” Heegaard added, saying Shmotolokha had “put a ton of time and energy into it.” For Shmotolokha and Ukraine aid, Heegaard observed, “it’s close to home. It is home.” 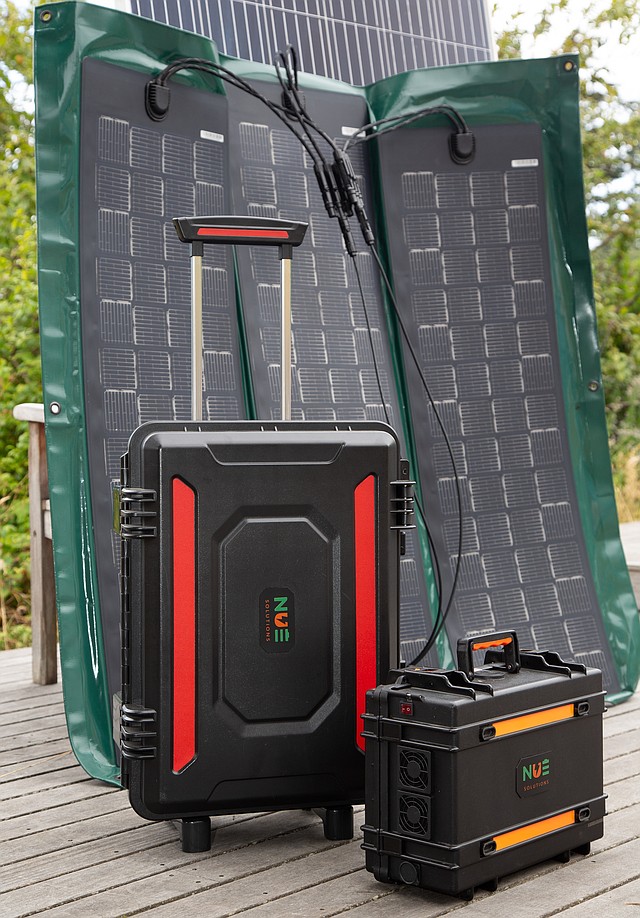 Undeniably, some of the work is tied to NUE’s core business of portable solar power supplies. Yet the intensity and breadth of the other assistance appears to greatly exceed anything most businesses would — or would even consider — providing.

The overall support is in line with NUE’s corporate mission, Shmotolokha said.

“We have an amazing ability to contribute,” he said. “In our business, disaster and humanitarian response is our No. 1 use case. So I combine volunteer stuff with work stuff.”

And how does he balance the Ukraine relief coordination with the demands of being a startup CEO?

The initial, verbal reply in our interview is what you might expect from a driven co-founder faced with any challenging circumstance. “It’s just a lot of hours,” he said. “It’s a labor of love.”

A short while later, I unexpectedly received an email with a more specific, and perhaps more deeply telling, response to my question.

“Honestly, for the first 3 months after the war started I didn’t sleep a lot,” Shmotolokha wrote. “One has to have a feeling of fighting back in order to stay sane. The injustices are incredible.” 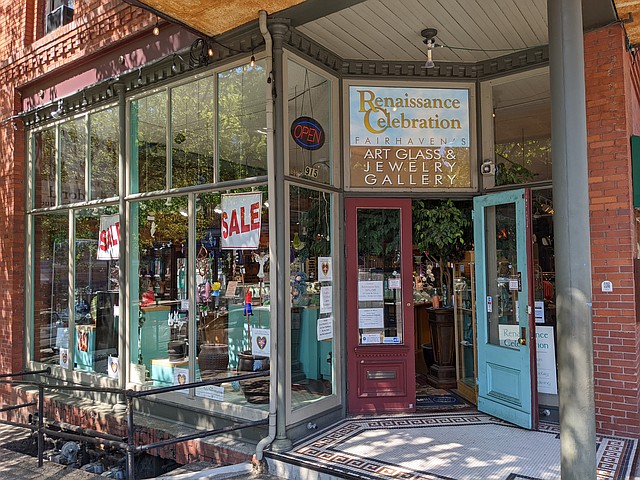 Renaissance Celebration at 915 Harris Ave. in Bellingham on Aug. 21. After more than 20 years in the Fairhaven neighborhood, the store will close on Sept. 25. (Frank Catalano/Cascadia Daily News)

The art, glass and jewelry gallery Renaissance Celebration at 915 Harris Ave. in Bellingham will close after more than 20 years in the Fairhaven neighborhood. Owner James Might said the last day will be Sunday, Sept. 25. A retirement sale will continue until closing day.