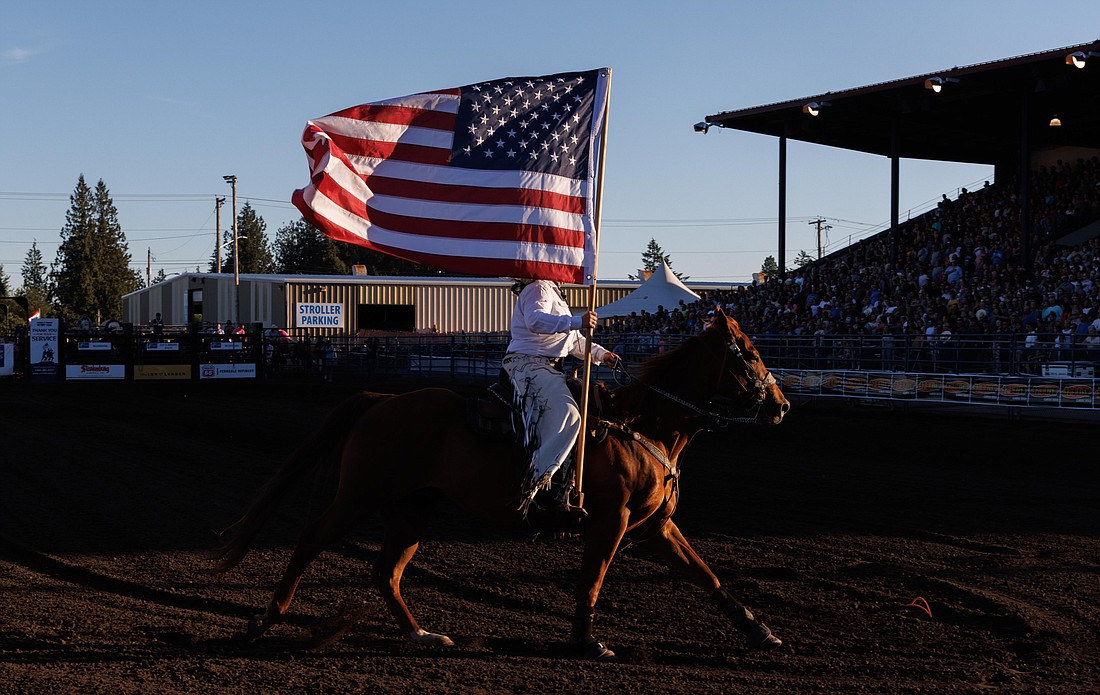 A rider parades the American flag around the arena during the National Anthem at the Lynden PRCA Rodeo on Aug. 15. (Andy Bronson/Cascadia Daily News)

In another time, rodeo announcer Jody Carper’s screed about God, country and defense thereof might’ve just slipped right on by, like a calf ducking under a lasso on the dirt infield of the Lynden fairgrounds.

In another place, even his over-the-top incantations that county fairgoers should "arm themselves" and his railing against woke-ism might’ve raised a few eyebrows among people on hand to see horses and cows — but not a headline.

Alas, our own time and place is a powder-keg political environment that scarcely needs additional tinder. That fact, remarkably, seems lost on leaders of the Northwest Washington Fair, whose response to last week’s rodeo spat amounted to a pronounced shrug of indifference.

To be clear, I wasn’t at the event, the PRCA Rodeo at the fairgrounds Aug. 15–16. But large numbers of eyewitness accounts from fairgoers, some of whom lashed out publicly on social media and in interviews with Cascadia Daily News, provided a detailed description.

Our reporting indicated that Carper, the self-styled “Patriotic announcer,” urged the crowd to “be ready” and coined America as the “backbone of the world.” The theme was familiar: Americans are under siege by a godless liberal enemy. As in other places where Carper has taken his traveling diatribe — recently, the Chief Joseph Days Rodeo in Oregon, it resulted in strong community backlash among attendees who went to see horses and cowboys and got a steaming side of nationalism.

Many local folks expect some degree of this in the regional fair’s hometown of Lynden, a nice place filled with mostly nice people that unfortunately has fashioned a reputation for itself as a safe harbor for far-right political invective. See: The Trump visit in 2016, and the infantile, don’t-tread-on-me tantrums thrown by segments of the north county population against common-sense pandemic health measures.

Lynden, fairly or not, starts out with two strikes in the minds of many outsiders, some of whom already have declared it (unjustly, in my mind) a Do Not Patronize zone. The county fair, which draws attendees from throughout the region, presents itself as a grand opportunity to help break down some of those prejudices.

That is the context for the spat over the rodeo last week, which — sorry, Facebook fabulists — was a patently obvious news story.

In Whatcom County, the reaction to the rodeo sermon was strong enough that many folks said they would rule out future trips to the rodeo, and the fair itself. Overreaction? In some cases, sure.

Of more concern — and frankly the sole reason the matter lives on in this space today — was the response of the fair. Or lack thereof.

Confronted with fairgoers' complaints, fair manager Selena Burgess, in multiple communications, lauded freedom of expression and said: “Given the wide variety of entertainment options available at the Fair, it is our hope that guests can find something that appeals to them.”

The message, while not an endorsement of Carper’s traveling tropes, seemed clear: If you don’t like what we dish up, feel free to shove away from the table.

Sorry, but for a quasi-public event such as a county fair, that’s not good enough. Especially for an institution whose success relies on community-spirited promotion from a broad range of local organizations, public and private.

The fair’s smorgasbord-of-events defense only works if there’s a reasonable expectation that attending a rodeo or other fair event might come with unadvertised, high-wattage political diatribe. Folks know what to expect when they shell out money for a Christian rock show or rap concert. But a reasonable person might overlook the likelihood that the calf ropin’ might include a side of political rancor.

Beyond that, the fair’s non-response response suggests a fundamental misreading of present politics: Fair management, along with others deeply offended that anyone took offense, brushed the matter aside as simple traditional political liberal/conservative squabbling — another skirmish in traditional left/right battles present in these parts for more than a century.

Except it isn't. Not today, with one of the nation’s two national political parties waging war on truth, and attacking fundamental systems that ensure the future integrity of elections.

Donning the historian’s hat here: Since the Civil War, politics in America have largely played out as spirited, even spiteful disagreements confined to an arena whose outer walls acknowledged the value of representative democracy. The erasing of those lines by the current local and national extremist power structure of the GOP has changed that equation. Today’s national party leaders wave the same flag as our grandparents, but are fueled by political sentiments of people those same great Americans fought and died to hold at bay.

This has tremendous implications for all measures of civic life. Sadly, right down to the Moo-Wich level.

A decade ago, the fair’s defense of politically tinged banter made as say, a bad Hillary joke, or a wink/nod endorsement of a Bob Dole or John McCain for president, might have been cringe-worthy, but forgivable. Today, they come across to many as complicity with a cabal of seditionists, hopeful for a theocratic, nationalist government bent on permanent minority rule.

I'm not suggesting here that the rodeo announcer or anyone at the fair embraces that outcome, but guilt by association is a real thing. If you’re running a county fair, you don’t have to agree with that assessment to see the train-wreck potential of failing to at least acknowledge it.

Hate to say it, but for a massive swath of the local populace, that makes the fair's go/no go decision an easy one.

As a lifelong fairgoer, a big fan of big horses and crusty corn dogs, I’ve long been an advocate of the Northwest Washington Fair as a coming-together activity. It'd be great to see it continue in that tradition. But I wonder whether, after last week, local institutions that have similarly supported the fair as a family event — which, let's face it, is reliant on copious amounts of community goodwill and free publicity — may be rethinking their level of future commitment.

That would be a shame, especially because it seems such an unforced error in the tinder-dry political landscape of the day. Here’s hoping it becomes more of a learning moment than an ignition point.