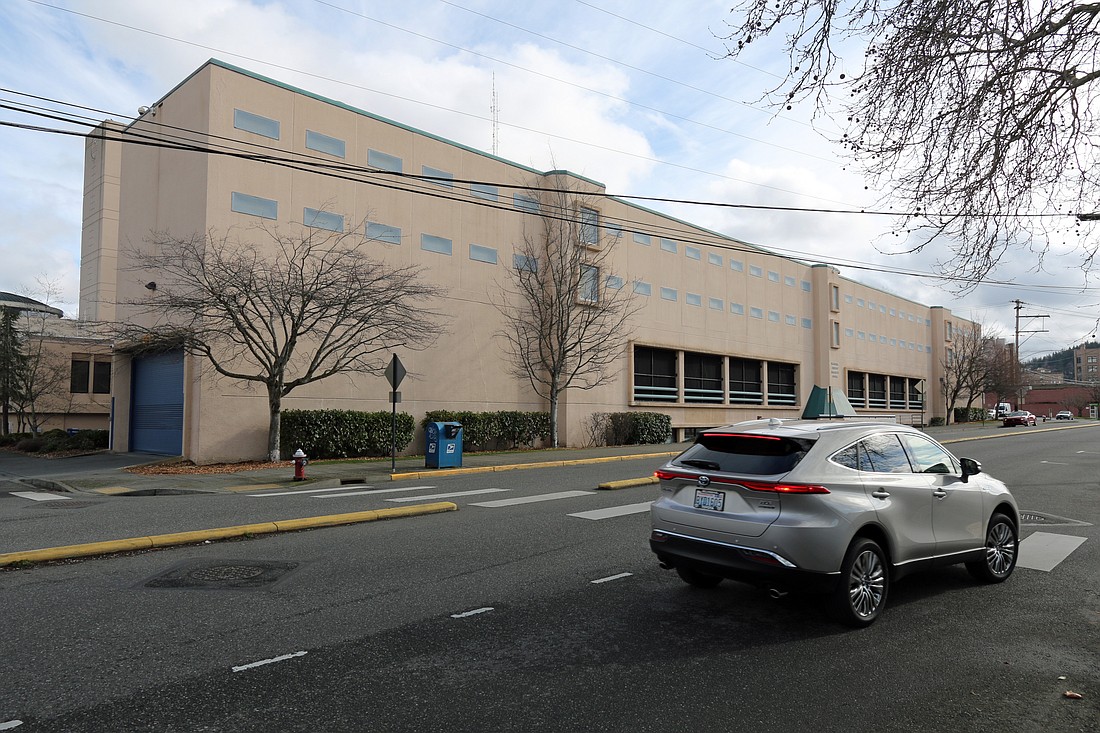 The mayors of all seven cities in Whatcom County wrote a letter to the County Council saying the current jail is inadequate for their needs. They urged the council to start setting aside funds for a new jail now. (Ron Judd/Cascadia Daily News)
By RALPH SCHWARTZ
Staff Reporter

Whatcom County leaders hope to build a new jail before the end of the decade — if everything goes right. City leaders in the county recently sent a forceful message to the County Council, saying they can’t wait that long.

“Today we collectively call on Whatcom County to dramatically accelerate plans to construct a new jail facility and to immediately expand jail capacity through whichever legal means possible,” stated a July 14 letter signed by the mayors of all seven incorporated cities in the county: Bellingham, Blaine, Everson, Ferndale, Lynden, Nooksack and Sumas.

In interviews, mayors said crime is up in their cities, and a jail incapable of holding all the perpetrators is part of the problem.

“We have multiple offenders at the moment,” Ferndale Mayor Greg Hansen said. “They need to be taken off the streets, and we’re not able to do that.”

A Sheriff's Office official agreed a lack of jail space has contributed to rising crime rates. Some suspects are booked into jail only to be immediately released, Undersheriff Doug Chadwick said.

"Unfortunately, this has resulted in suspects that are emboldened to continue to commit crimes with little fear of apprehension or prosecution," Chadwick said in an email to Cascadia Daily News.

Hansen observed that the existing jail opened when the county's population was 60% of what it is today.

“We’ve been working on this for so long, and the problem’s gotten worse, not better,” Ferndale's mayor said.

The current jail, which opened in 1983, holds up to 212 inmates, Chadwick said. The Interim Work Center on Division Street houses an additional 150 low-risk offenders. The County Council put jail-construction bonds on the ballot in 2015 and 2017. Each proposal called for a jail with approximately 500 beds at a cost exceeding $100 million. They both failed.

After voters overwhelmingly rejected the second sales tax measure in 2017, county officials went on a listening tour to learn why residents voted “no.”

Listening session participants said the county’s proposed jail in Ferndale was too big, too expensive and too far away from courts and social services in Bellingham. They also said some of the jail’s repeat occupants should never be in there in the first place — particularly those experiencing homelessness, mental health issues or addiction.

Then the pandemic brought jail planning to a halt. If county officials are going to mark their calendars with a new jail groundbreaking, that date has been postponed at least three years. A third tax measure, originally planned for the 2020 ballot, is now slated for November 2023.

City mayors expressed impatience in their July 14 letter, which includes a line in bolded letters: “Action is needed now!”

The mayors requested that the Stakeholder Advisory Committee (SAC), tasked with planning the new jail, come up with a recommendation for the facility's size and location by Sept. 1 — a deadline the committee won’t meet. The group doesn’t convene again until Sept. 15.

The mayors also asked the County Council to begin securing funds for a new jail now, rather than waiting until a ballot measure that won’t authorize a new tax until 2024.

“We just wanted to encourage the County Council … to spend the money to jump-start the process,” Lynden Mayor Scott Korthuis said in an interview.

The mayors suggested the county raise property taxes up to the legal limit of $3.4 million and divert another $20 million in COVID-19 relief the county received from the federal American Rescue Plan Act.

“Every week we delay starting this process causes exponential increases in the costs to our community and erodes the public faith in our leaders, in law enforcement and in our courts,” the mayors’ letter said.

County Council Chairman Todd Donovan said in an interview the mayors’ funding ideas made sense financially but not politically.

“The cities are asking us to unilaterally raise property taxes without public support,” Donovan said, adding that a tax hike without voter consent could lead them to reject this November’s Emergency Medical Services levy or torpedo the jail bond next year.

“I’m not opposed to the idea, but the timing,” Donovan added. “We have to wait and see what happens with the EMS [levy].”

The mayors’ call for expanded jail capacity may run counter to the work of the SAC. Many of its members are intent on enhancing behavioral health and jail-diversion programs in order to build a jail with as few beds as possible.

In an email to Cascadia Daily News on Monday, the office of Bellingham Mayor Seth Fleetwood said he stands by the language of the July 14 letter. The mayor said he recognized the “exceptional, thorough and necessary work” of the Stakeholder Advisory Committee.

“The current situation with booking restrictions is untenable, and a new functioning corrections facility with adequate staffing and supportive services is needed,” the mayor’s office said in the email, which included a statement from Fleetwood:

“The purpose of the letter was to convey the urgency and compelling need for the new jail as part of a coherent and functioning criminal justice system that can incarcerate, prosecute and treat people in need.”