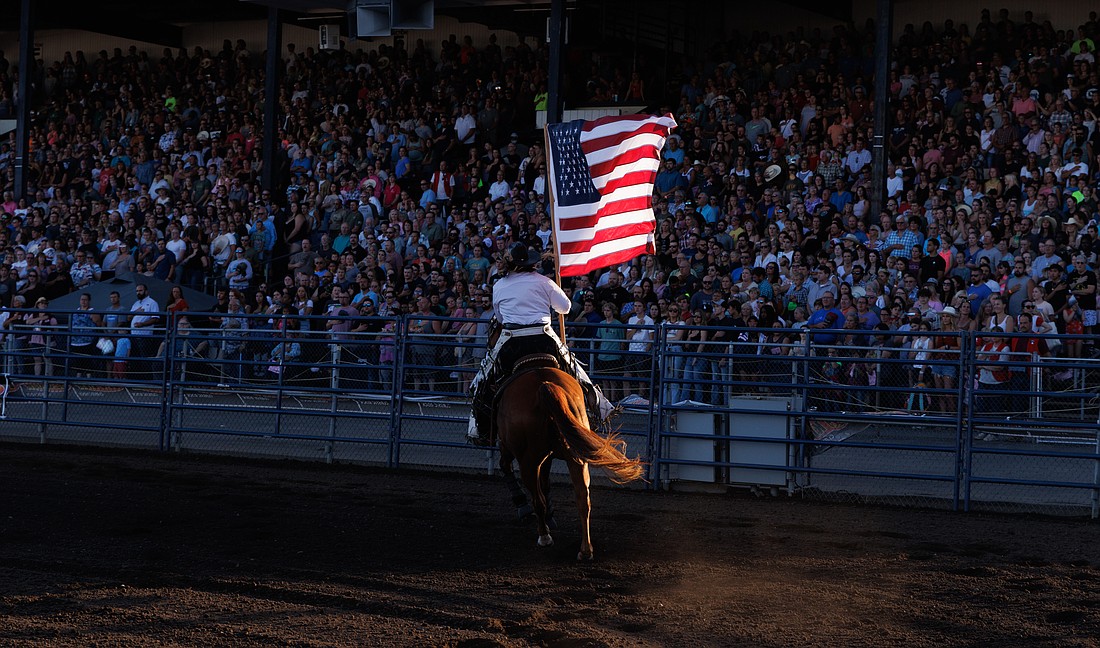 A rider parades the American flag around the arena during the National Anthem at the Lynden PRCA Rodeo on Aug. 15. (Andy Bronson/Cascadia Daily News)
By AUDRA ANDERSON
News Producer

The PRCA Rodeo took place amid the Northwest Washington Fair, a 10-day entertainment event that attracts visitors from around the region.

The Rodeo began with a prayer — typical for the Lynden Rodeo — but Carper made comments about how prayer is being taken out of schools, the first of many offhand remarks, attendees said.

Mike Howe, 32, attended the Rodeo on Monday for the first time with his fiancée. He said he expected some elements of the commentary, such as the traditional prayer for the safety of the cowboys and cowgirls, but Carper took it too far.

“The reason we came there was to watch a cool show, a cool event,” Howe said. “When you start having an announcer that is throwing personal beliefs into a show, it starts to overshadow the purpose of the event.”

Carper spent at least 20 minutes on a politically charged preamble, Howe said, including comments about being called a conspiracy theorist, and protecting America.

Catherine, 27, whose last name has been omitted for fear of retaliation, has partaken in and attended the Lynden Rodeo since she was a child.

She said she also attended Monday’s Rodeo, and the commentary left her “feeling disquieted.” She said Carper made comments about “being ready” and “making sure you have firearms,” as well as America being the backbone of the world.

“I turned to my mom and my boyfriend and said, ‘I don’t remember this being so explicit in previous years.’ It seemed like a much greater showboating from the emcee than before. And the whole time, he was making these fomenting, undertone-y comments,” Catherine said.

Carper, who touts himself as the “Patriot Announcer: Committed to helping save America” on his website, did not respond to multiple requests for comment.

Howe said Carper prefaced his commentary by saying his opinions are not endorsed by the Fair, and Fair Manager Selena Burgess told Cascadia Daily News in an email that they received “an overwhelming positive response from two nights of sold out rodeo.”

“We understand and respect that there are many differing viewpoints, and all have the freedom to express them,” she continued. “Given the wide variety of entertainment options available at the Fair, it is our hope that guests can find something that appeals to them.”

It’s not Carper’s first rodeo where he’s landed himself in hot water. Just two weeks prior to the Lynden event, Carper’s remarks at the Chief Joseph Days Rodeo in Joseph, Oregon, prompted a news story and multiple letters to the editor in the Wallowa County Chieftan.

In an Aug. 10 letter to the editor titled “A rodeo, not a Trump rally,” David Olmos of Portland wrote: “I drove more than five hours each way to watch a rodeo and contribute to the local economy by dining and lodging in Joseph. Not to listen to some guy spout his views on ‘there are people trying to destroy our country,’ freedom of religion and prayer, and saying the code phrase, ‘Let’s Go Brandon.’ Keep your political views to yourself. It’s a rodeo, not a Trump rally, pardner.”

Joseph resident Eric Pippert wrote in an Aug. 10 letter, “I’ll take my rodeo served up without a side of jingoistic, dog-whistle political commentary, with a sprinkling of misogynistic and racial tropes by the announcer and rodeo ‘clown.’”

Carper’s remarks at Lynden's Rodeo left Howe and others disheartened. The rodeo should be enjoyable and accessible to anyone, regardless of political stance, Howe said. He does not plan to return to the Rodeo next year.

“I’m not interested in going back to a rodeo again. I’d love to go watch people ride horses and do cool things on horses because that’s not something I get to see ever, and that’s what I was hoping to see,” Howe said.

Catherine shared similar sentiments, despite how deeply she relates to the rodeo. She is unsure if she wants to attend next year.

“It’s supposed to be an event that’s representing the whole of this county, and clearly in this county we have a deep divide geographically, red and blue,” Catherine said. “But this isn’t the Lynden Fair, it’s the Northwest Washington Fair, and we should try not to alienate an entire group of people who might want to come to this.”