Embracing our inner sloth: Let that sailboat be!

Shipwreck City has Bellingham's name all over it 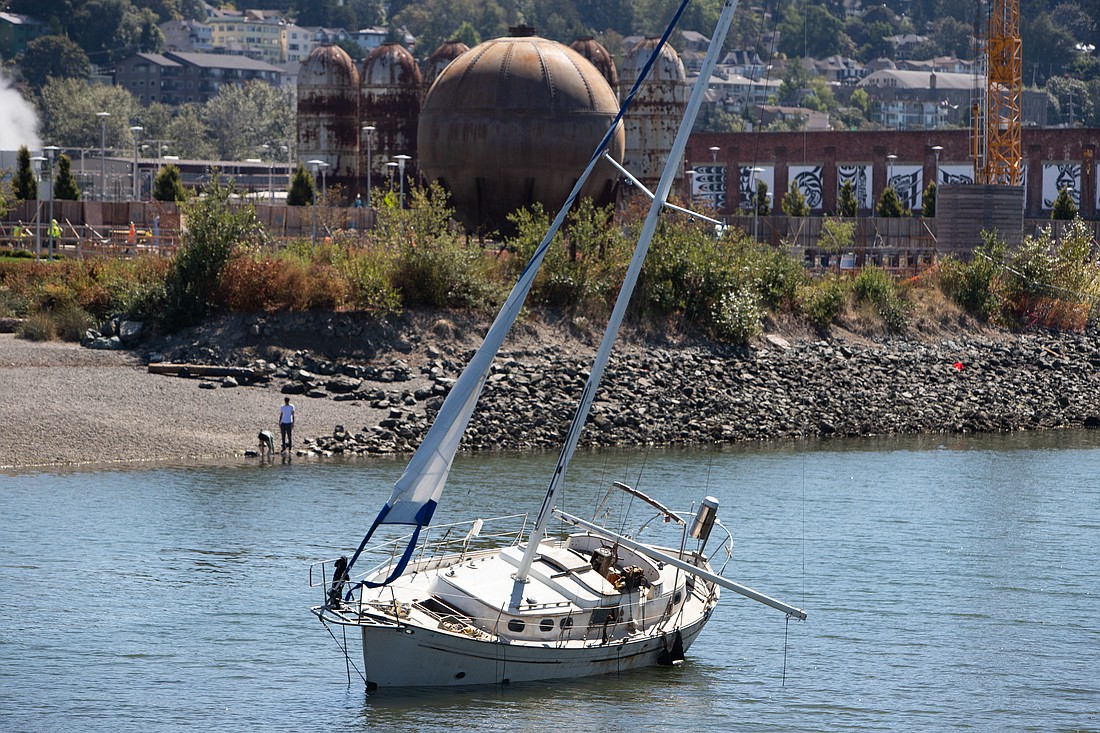 Hands off: Best to leave that grounded sailboat to rot in place, just like the "iconic" Acid Ball lurking nearby, as a feature, not a bug of local tourism strategy, suggests columnist Ron Judd. The sailboat is seen beached near Waypoint Park on Aug. 15. (Hailey Hoffman/Cascadia Daily News)

Breaking news Editor's Note: A few short hours after this modest proposal to keep the drowned sailboat in place for civic shipwreck marketing purposes hit newsstands Wednesday morning, the local powers that be had the sailboat hoisted from the waterway with a crane. Coincidence? We think not! To the port and city: Is this your subtle way of saying you think Shipwreck Park was a bad idea? (Most people would just send an intemperate email.) To greater Bellingham: You're welcome! And rest assured that these newly conferred, unlimited powers of reverse psychology will be used only for the forces of good. 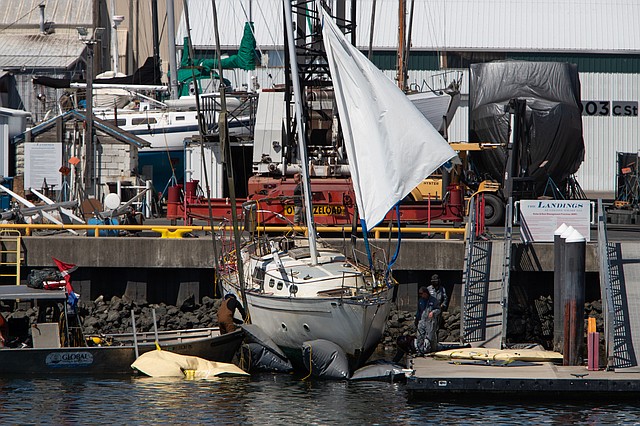 Using a crane, Global Diving and Salvage on Wednesday removed a sailboat, which had been hard aground in Whatcom Creek Waterway near Waypoint Park since July. (Hailey Hoffman/Cascadia Daily News)

WAYPOINT PARK, Toxic Sludge Basin — As usual, the port and city have it absolutely, 100% upside down and backwards.

Ever since it drifted to a temporary watery grave inside Whatcom Waterway last month, the SS Abandoned Sailboat has been a topic of much discussion, with managers from the state and City and Port of Bellingham interrupting their late-summer Sangria Research Projects to answer the question: Who’s responsible for moving that ugly piece of maritime scrap, hard aground right off the beach at Waypoint Park?

Where others see an ugly, we see opportunity — a chance, after two decades, to turn the Port/City Waterfront Nondevelopment Project into something truly buzzworthy.

Our modest proposal: Leave the damn thing be. And promote the hell out of it.

Think, dear ‘hamsters, of the marketing potential of having that long-missing keystone ingredient to the waterfront project: A third promotional leg to go along with the (cough, cough) iconic Acid Ball and what surely must be the most-prominent waterfront garbage company headquarters in the Northwest.

“Waypoint Park?” Forget about it. Shipwreck Beach, baby. Which is more likely to inspire an antisocial media post?

Look around the region: A little wrecked ship goes a long way.

Consider what it’s done for greater Astoria/Warrenton, Oregon, for cripe’s sake. Has anyone seen the nightly lineup of folks shuffling down to the beach at Fort Stevens State Park to make Insta-imagery of the tiny shards of steel standing as the last rusted shards of the ill-fated Peter Iredale?

Few things are embraced with more glee by humanity than abject misery and unintended disaster. Why would we toss that out with the mercury-laced bathwater?

Imagine, if you will, the shipwreck-themed Unhappy Hour drink specials from the deck of This Week’s Habitant of the Granary Building. Our place on the tourism map awaits.

Sometimes, opportunity comes knocking in the form of a derelict outcast, with partially unfurled spinnaker limply hanging as a visual representation of the waterfront project’s ultimate flaccidity and futility.

Highlighting the presence of the sunken sailboat — dare to dream, even spotlighting it at night, in the established downtown theme of boldly heralding failed ventures — could be a refreshing and possibly groundbreaking public acknowledgment that, much like most of the rest of us in These Troubled Times, the city/port brain trust has simply given up and decided to go watch a “Below Deck” marathon down in the basement of Old City Hall.

It's time, in other words, to embrace our civic inner sloth and celebrate our inability to shift from a resource-extraction economy to a cleaner, greener, something-please-God-anything alternative, which after half a century we should admit just ain’t really happening.

“Bellingham: Still stuck in neutral — and happy to be there!”

Best of all: Unlike the civic boondoggle unfolding due south at the Nervous Heron Memorial Wastewater Treatment Facility, this rebranding effort won’t bankrupt anyone. It really costs nothing, other than a bit of public imagination — one of the few commodities rarely lacking here in the upper left corner. Some suggestions:

The wreck needs an assigned identity, starting with a name. Some current and former civic office-holders and local institutions come to mind, but we’re willing to crowdsource this one. Give some thought to the “Wreck of the (Blank)” and let us know. (Someone might entice Gordon Lightfoot into the Mount Baker Theatre for a special rendition of The Wreck of the SS Sadighi.)

The wreck needs a compelling — preferably fake — origin story. (We are, remember, marketing to tourists, most of whom read an “Angle Park” sign and start scouting for picnic tables.)

Or it might have been outbound, perilously overloaded with bags of dog poop painstakingly collected by an over-organized group of active Nextdoor site users who have been forced into deep first-world therapy by utter thoughtlessness of folks who willfully and intentionally psychologically torture others by bagging poop and leaving it to ripen alongside a trail.

Or even better: The scuttling resulted from a do-gooder mission to remove and recycle 18 tons of previous public Waterfront Redevelopment Scoping Studies from one of many empty local Port of Bellingham waterfront warehouses. One three-ring binder too many filled with printed PDFs left all hands on deck reaching for the PFDs.

Next steps: Scoping meetings, and assemblage of a broad Blue Ribbon Steering Committee to weigh in on particulars of the plan. Several years’ worth of meetings and Zoom calls. Consultant’s reports to the tune of about $17 mil. Consultation with various state and federal agencies.

Once that's all done, just pass the work product our way and we’ll do the rest: Namely, dump it in a recycle bin and hand the whole thing off to a broadly loathed development firm headquartered as far away as physically possible.

In keeping with the spirit of the pending civic shipwreck rebranding effort, it literally is the least anyone can do.