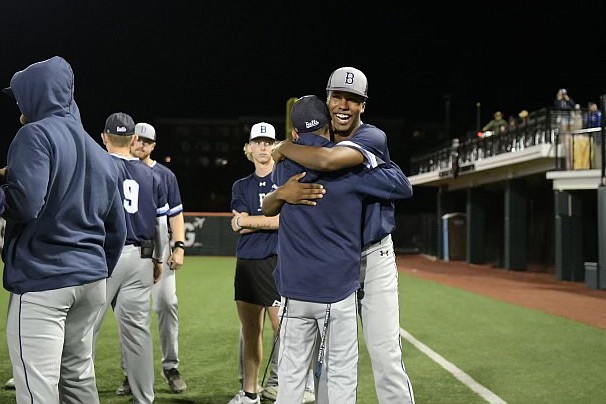 The Bells, going for their first WCL championship since 2014, struggled to generate offense against a powerhouse Knights team that secured its sixth-straight league title with the win.

Bellingham mustered just three hits on the night, one each by Touissaint Bythewood (1 for 4), Noah Meffert (1 for 3) and Walker Burchfield (1 for 2, one walk).

“Their arms were on tonight,” Bellingham head coach Haydan Hastings said. “They used the zone effectively and had a good game plan. We had baserunners but they seemed to wiggle out of it every time. They had two or three double plays.” 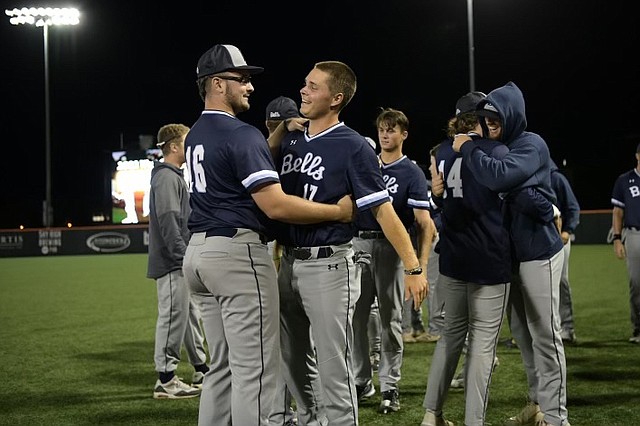 Bellingham Bells players hug on the field after losing to the Corvallis Knights, 5-0, in the West Coast League championship on Aug. 15. (Photo courtesy of Howard Hawk)

As Bellingham’s offense went silent, Corvallis chipped away, scattering their five runs across five innings with eight total hits on the night.

The Knights took the lead early when Logan Johnstone hit an RBI single to score Jonah Advincula from second base, giving them the only run they would end up needing.

Mason Le made it 2-0 Corvallis after a Bellingham error allowed him to score from third base in the second inning. Advincula scored again in the third inning with another RBI by Johnstone to make it 3-0. Tyler Quinn knocked in Johnstone in the fifth to put the Knights up 4-0, before Briley Knight’s sacrifice fly in the seventh scored Ryan Stafford for what would be the final run of the game.

Bellingham had one batter reach in the eighth before hitting into a double play, then three consecutive strikeouts in the ninth ended their chance of a comeback.

“Corvallis is a really good team,” Hastings said. “We felt their fans tonight for sure. They came out, got some big hits and were super aggressive on the base paths. They’d obviously been there before.”

It was a disappointing end for a Bells team that captured the North Division’s first-half title and the division’s top seed in the playoffs. They used a 10-game winning streak, part of a 13-1 stretch, to finish the regular season with a 33-20 record — third-best in the league behind Corvallis and the Portland Pickles. 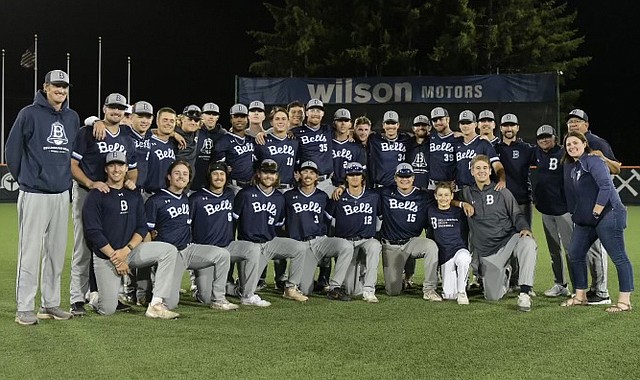 Bellingham swept the Victoria HarbourCats in two games during its divisional series playoff on Aug. 10, then clinched the North Division title and a spot in the league championship with a victory over the Wenatchee AppleSox on Aug. 13.

That set up Monday’s showdown with Corvallis, winners of the last five WCL championships. The Knights reached the title game by taking two of three games from Yakima Valley in their divisional series, then edging the Ridgefield Raptors in the South Division title game.

Bellingham ends its season with a 36-21 overall record.

Hastings said the one thing he’ll remember about this season and this group of guys is they never quit.

“It didn't matter who we put out there, they had a ton of fight in them,” Hastings said. “They showed up, wanted to compete and wanted to play. They got better as the season went on and, as a coaching staff, that’s all we could ask for. Super proud of these guys.”