Orcas have been spotted in the area, but are moving away 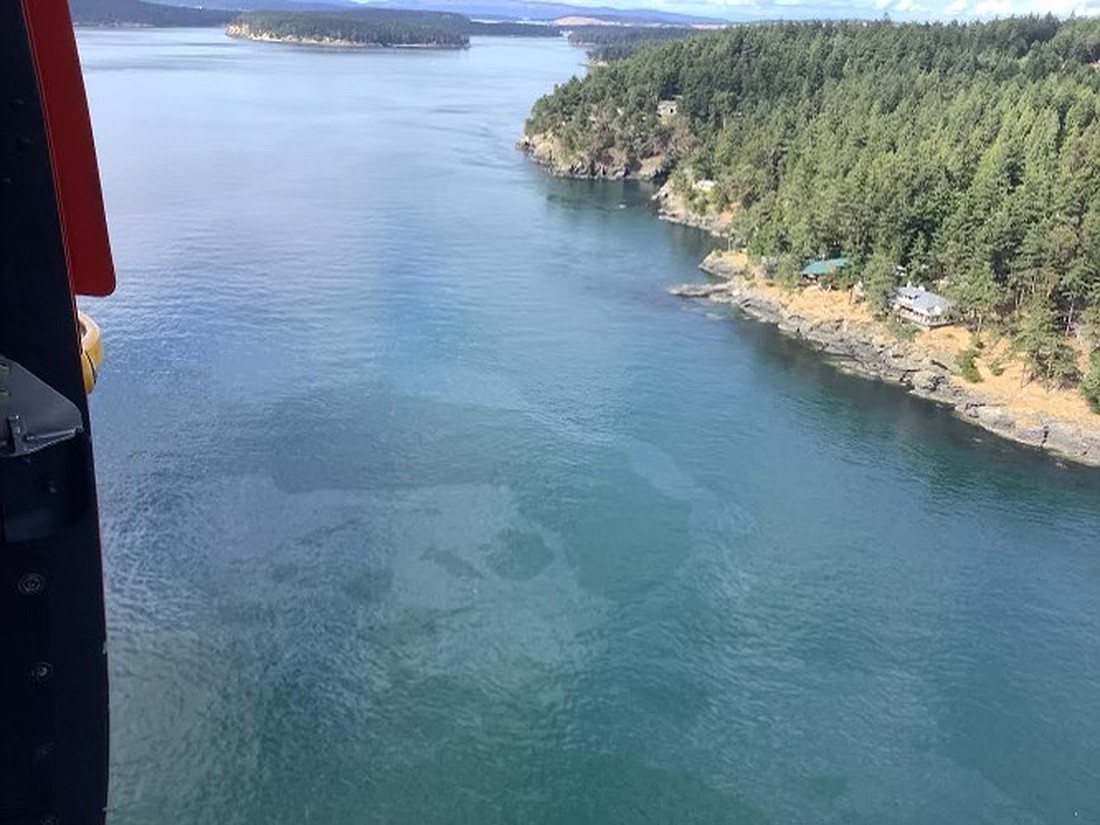 The Saturday, Aug. 13, 2022, aerial photo released by the U.S. Coast Guard shows a diesel spill off the west coast of Washington state's San Juan Island after a 49-foot (15-meter) fishing vessel sank with an estimated 2,600 gallons (9,854 liters) of fuel on board. A Good Samaritan rescued all five crew members on the Aleutian Isle as the vessel was sinking near Sunset Point, the Coast Guard's 13th District Pacific Northwest district in Seattle and KIRO-TV reported. (Photo courtesy of U.S. Coast Guard via AP)
By EMMA GARDNER
Staff Reporter

The U.S. Coast Guard, the National Oceanic and Atmospheric Administration, Washington Department of Ecology and other agencies are responding to a small fuel spill after a 49-foot commercial fishing vessel sank off the west side of San Juan Island Saturday.

An estimated 2,600 gallons of fuel products were on board the Aleutian Isle, including 2,500 gallons of diesel and 100 gallons of other oil products. The maximum potential of the spill, meaning the worst-case scenario estimate based on the capacity of the ship’s fuel tank, is 4,000 gallons, said USCG petty officer Michael Clark.

The agencies are coordinating to minimize damage to marine life from the spill, including two pods of Southern Resident orcas. The J and K pods are currently moving west out of Haro Strait into the Strait of Juan De Fuca, away from the spill, and have been sighted off Port Angeles, according to Hannah Miller, a biologist contractor for NOAA. Miller added that these two pods are currently the closest orcas to the spill.

Previously, the pods were spotted off the southern end of San Juan Island “in the last 12 to 24 hours,” Clark said. “None have been in the immediate vicinity on the west and northwest side of the island.” 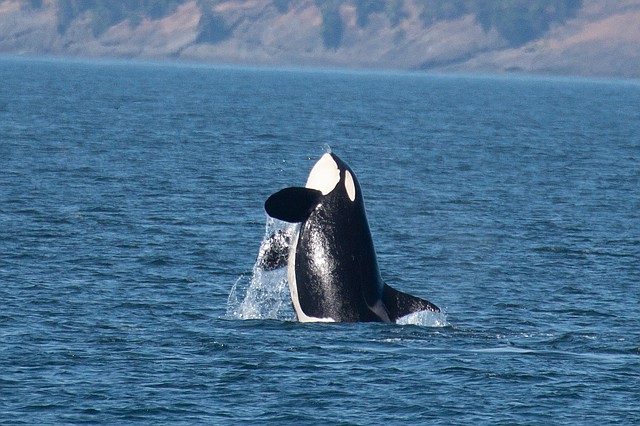 A Southern Resident orca breaches in Haro Strait in 2015. Whale watchers are concerned resident orcas might wander into a fuel spill from a sunken fishing boat in the San Juan Islands. (Ron Judd/Cascadia Daily News)

Responders at the scene are prepared with NOAA-approved sonic deterrents to keep any vulnerable marine life, including orcas, away from the spill while crews work to clean it up, Clark said.

The vessel began to take on water around 2 p.m. on Saturday, and by 5 p.m. a visible sheen less than 2 miles wide was observed from Coast Guard helicopters, according to Clark and a USCG press release.

All five crewmembers from the boat were rescued by a “good Samaritan” in a passing vessel after the sinking vessel sent out a distress call. Following the rescue, the USCG’s response shifted to pollution control, Clark said.

Contractors were able to locate the vessel on the sea floor Saturday night using side-scan sonar, according to the Coast Guard.

The vessel went down in an estimated 100 to 150 feet of water, according to Clark, and commercial salvage contractors are being contacted to salvage the vessel and remove the fuel tank. The Coast Guard’s Oil Spill Liability Trust Fund has been authorized to spend $130,000 to respond to the spill and salvage the vessel.

The Coast Guard, NOAA and Ecology are also working with the Canadian Regional Operation Center to address the spill due to its proximity to the maritime border, according to the Coast Guard’s press release. Other responding agencies include the San Juan County Office of Emergency Management and the Island Oil Spill Association, the Coast Guard said.

By Sunday afternoon, the Coast Guard remained on scene and a subcontractor had placed absorbents in the water to recover visible material. Contracted divers were working to determine how to handle the sunken vessel as the depth of the wreck poses safety concerns.

Diving operations are set to begin Monday to plug the vents on the vessel and begin the defueling process.

This story will be updated as more information becomes available.