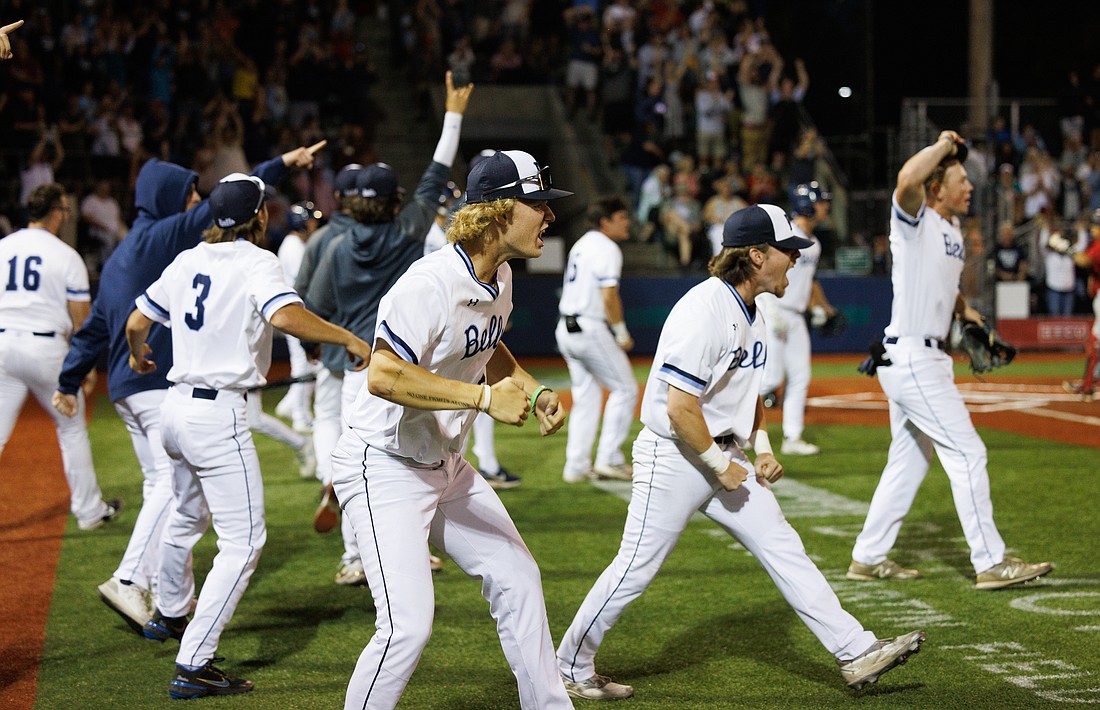 Bellingham Bells players spill onto the field as they take the lead in the eighth inning on a double by Touissaint Bythewood. The Bells beat the Wenatchee AppleSox to advance to the league championship on Monday. (Andy Bronson/Cascadia Daily News)
By CASSIDY HETTESHEIMER
Staff Reporter

In the top of the eighth inning of the Bellingham Bells’ North Division Championship matchup against the Wenatchee AppleSox, Bells centerfielder Toussaint Bythewood collided heavily with the outfield wall as he scrambled backward, just missing a difficult catch.

He was slow to get up but told Bells interim head coach Haydan Hastings he was OK to remain in the game, despite Hastings’ suggestion to pinch hit.

Just a few minutes later, in the bottom of the eighth inning, Bythewood hit a soaring two-run double to deep right field to put the Bells ahead 4-2, the final score of Bellingham’s Saturday-night victory at Joe Martin Field.

“I have a lot of adrenaline right now, so I feel good, but it’ll probably hurt tomorrow,” Bythewood said after the game. “I just wanted to help out my team as best as I could ... It could have been any one of us, but today it was me.”

The win sends Bellingham to the West Coast League title game on Monday, when the Bells will travel to face South Division champion Corvallis Knights.

Within the game’s first three innings, Bythewood also made four catches deep in center field to limit Wenatchee’s offense, which had put up 27 runs in two games during the AppleSox’s first best-of-three playoff series.

Touissaint Bythewood watches his hit sail into the outfield, scoring two runs, to give the Bells a 4-2 lead in the eighth inning. The Bells beat the Wenatchee AppleSox at Joe Martin Field on Aug. 13. The Bells head to the championship game on Monday. (Andy Bronson/Cascadia Daily News)

During those early innings, the Bells struggled to reach base, recording only three at-bats in each of the first five innings and going hitless across four innings.

“Even when we were losing, even when it was a tight game, we never lost our energy,” Bythewood said. “We all kept talking, communicating, helping our teammates get better.”

Bellingham’s starting pitcher, Shance Spencer, recorded eight strikeouts in six innings, limiting the AppleSox to one run. Lukas Frers pitched a scoreless eighth inning before Cameron Dayton closed in the ninth, helping the bullpen total 11 strikeouts, seal the win and send the Bells team onto the field to celebrate in front of a boisterous crowd.

“It’s all about getting outs, getting ground balls, putting the ball in play,” Spencer said. “The ball doesn’t fly here at Joe Martin [Field]. We were trying to get a lot of pop flys, balls in the air so that they can get caught.”

The AppleSox went ahead early, with Joichiro Oyama hitting a triple then heading home thanks to a sacrifice fly from Xander Orejudos.

The Bells countered in the sixth behind singles from Willis Cresswell and Jaidon Matthews before Robbie Vandegrift capitalized with a textbook bunt to load the bases. After Malcolm Moore reached first base and Cresswell was tagged out at home, Noah Meffert scored Matthews on an RBI single.

“We practiced yesterday for a couple of hours, and I think 45 minutes of those two hours was bunting, and it showed up in tonight’s game,” Hastings said.

An error off a wild throw by the AppleSox later scored Vandegrift, putting the Bells ahead 2-1. 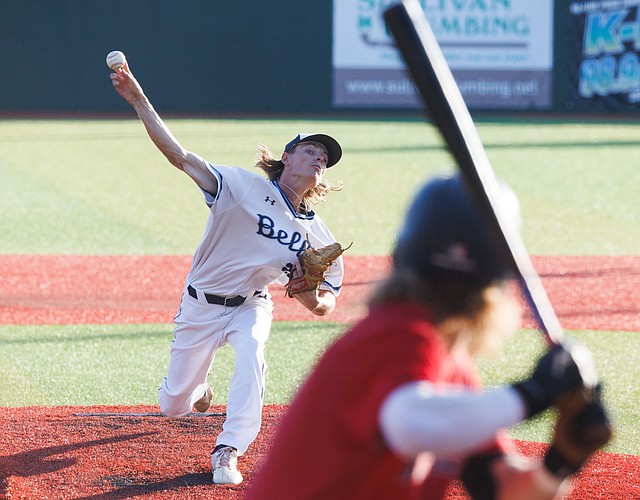 Shane Spencer pitches against the Wenatchee AppleSox on Saturday night. The Bells won and head to the championship game on Monday. (Andy Bronson/Cascadia Daily News)

Wenatchee’s pair of singles, followed by a walk and a bunt, tied the game up at 2-2 in the seventh, before two walks by Moore and Easton Amundson set up Bythewood’s two-run double in the eighth.

In the top of the seventh, a highly contested call ruling Wenatchee’s Adam Fashel safe at first, after initially being called out, elicited some displeasured booing from the home crowd as Joe Martin Field buzzed with the energy of playoff baseball.

“[The Bells] did a great job of staying in the game after that call,” Hastings said. “It was really the crowd [that allowed us to stay focused] … Let the crowd handle the umpire and we’ll focus on the game.”

The Bells will now look to keep momentum churning as they travel to Corvallis for the West Coast League championship at 6:35 p.m. Monday.

When the two teams played in Corvallis in early June, Bellingham took two of three series matches, but with players returning to college or joining the rosters late, this title game will be a new-look matchup between the two division champions.

The Knights hold the record for most WCL titles with eight, including their current streak of five consecutive. In 2016, they beat the Bells for the title.

“They’ve got a great club over there,” Hastings said. “We’re going to try to go in there and take the crowd out of it and just play our brand of baseball. We’re going to pitch it well on the mound like we always do and come up with that big hit.”