Cutting straight to essentials at the NWW Fair 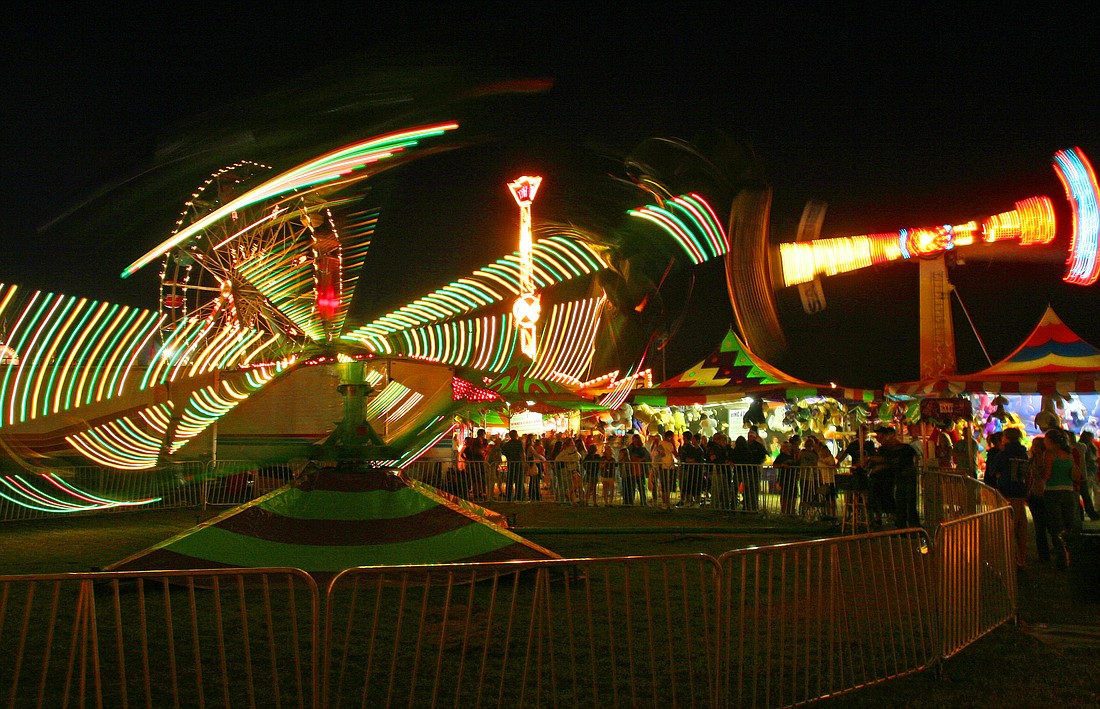 The midway at the Northwest Washington Fair in Lynden is a popular nighttime gathering spot for thrill-seeking carnival ride fans, not to mention that one non-spin-fan designated family member assigned to stand and hold everyone's stuffed animals. (Ron Judd/Cascadia Daily News)

For some of us in upper-left Washington, midsummer brings laser focus to a vital matter: the fate of critical materials winding their way through a troubled supply chain, to be assembled into a magical mix providing satisfying sustenance for the masses.

It goes without saying that a corn dog can go either way: Sublime, usually produced at the Fair, or the frozen mushpop microwaveable effluvium that is the Kroger’s grocery store version, available at your local Fred Meyer.

In fact, the ultimate county fair corn dog and about four dozen draft horses — more on those in a second — are the two critical things any real local person should know about, and celebrate at the Northwest Washington Fair in Lynden, which opens Thursday.

We already know what you effete farm-to-table types are saying — the corn dog is trash gut-packing material, not cuisine, Philistine! We don’t care.

What’s important, standing here at the precipice of the Fair’s opening, is that nearly everyone slinging the above slur has never had a homespun, truly hand-dipped, crunchy-corn-coated, steaming-dog fair midway version of America’s most famous dog-on-stick delicacy.

Or they wouldn’t say it. They just wouldn’t.

The corn dog, like Frito Pie, Jell-O salad and corporate welfare, is a great American tradition of murky origin. Some people trace it back to early Texans who stumbled this way from Germany — who do know something about the bratwursts that likely inspired the theme. Whatever the source, it’s we Americans who turned something potentially deadly into … something potentially deadly that’s satisfyingly, unapologetically deep-fried.

A true, old-fashioned corn dog (Wikipedia notes a patent filed for “fried food impaled on a stick” as early as 1929) is a hot dog or sausage on a stick, hand-dipped, per-each, on-site, immediately before cooking. This is of deadly importance because it prevents the crust from turning to a soggy glop of what can amount to sodden, cornmeal packaging.

And then: Precise timing and temp control on the deep fry is critical. Critical.

All of this matters because when the Fair gates swing open, visitors will find numerous signage advertising “HAND-DIPPED CORN DOGS.” And only one of them is the Real McCoy.

Sorry, not sorry, we’re not going to spoil the fun and tell you which one. And the truth is, we really can’t. Because all the food booths at the Fair are generally identified only by clever, memorable names such as FOOD and CURLY FRIES and BURGERS and whatnot. And the one we always flock to for corn dogs is the same, hiding right there in plain sight, when it is not obscured by choking woodsmoke from the nearby giant turkey leg barbecue pit.

As a gift to the public, we’ll give a hint: The NWW Fair’s premiere corn doggery is located within an underhand softball’s lob of the draft horse barn.

And that, right there, plus a squirt of mustard, is worth the price of admission ($15), but it’s not the only reason to spend a few hours wandering the sawdust paths of the Fair, a grand national and local tradition with roots tracing back more than a century.

The Fair is not for everyone, granted, which is fine; there's not room for everyone in Lynden. Those who partake all have their own reasons to meander up The Guide, but the universal draw is immediately apparent: The Fair brings out the kid in folks of all ages.

In a society long ago smothered by image-consciousness, it’s one of the last, best remaining celebrations of kitschy Americana. It'd take all day to run down all the visible manifestations of that — from the curbside hypnotist to the Oversized Cop Equipment/Farm Implement display to the camels (yes), suckling pigs, the screeching-metal delight of the demolition derby and quasi-casino-level entertainment (apologies to Pat Benatar).

But in Lynden, the Fair’s value runs a bit deeper. Whatcom’s version, even more than others, has steadfastly clung to its pastoral roots, celebrating local agriculture and animal husbandry in a respectful, but also self-effacing way (do see: the sheep fashion show). Say what you will about this backward focus, but it is undeniably honest, a quality that’s in short supply in our current era of snark and spin.

To appreciate why this matters, take a frivolity timeout to stroll through the draft horse barn, which serves as the annual August headquarters for about 50 one-ton gentle giants with dinner-plate-sized hooves. The Fair is one of the grandest assemblages of these magnificent beasts, known to have the personality of family pets, to be found anywhere in America.

Some of the family caretakers of the horses are deep into third and even fourth-gen stewardship. You can witness the dirt-flying results at the free Grandstand Horse Show (1 p.m. daily, Aug. 15–20). Watching an entire parade grounds filled with thundering six-horse hitches perform the “Lynden Fair free drive” is a NW Washington bucket-list experience, right up there with watching a flock of 10,000 snow geese take flight in the Skagit Valley.

And it’s likely the only one that can be witnessed with a stomach very, very full of a world-class corn dog, assuming you got the right one. (If you didn't, there's always next year to try, try again.)