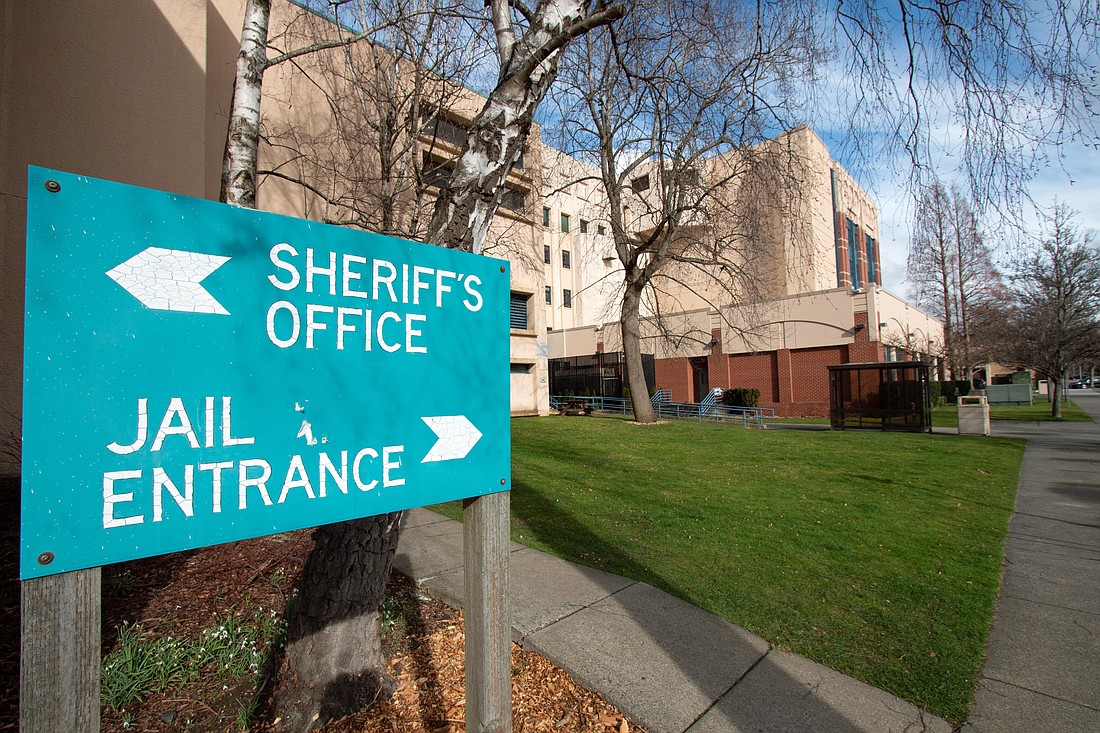 The Whatcom County Sheriff's Office reached a settlement agreement in 2019 with the American Civil Liberties Union to enable opioid users in the jail to receive medications to relieve withdrawal symptoms and reduce the risk of future overdose deaths. The program expanded considerably in 2022. (Ron Judd/Cascadia Daily News)
By RALPH SCHWARTZ
Staff Reporter

As the number of deaths by fentanyl overdose climbs locally and statewide, the Whatcom County Sheriff’s Office and the American Civil Liberties Union (ACLU) have worked out a partial solution.

Inmates in Whatcom County Jail with opioid use disorder — typically involving the synthetic drug fentanyl or heroin — now have access to medications that blunt the cravings and suppress the euphoric effects of the illicit drugs.

The jail started what is known as medication-assisted treatment (MAT) for opioid users in September 2018, after the ACLU filed a class-action lawsuit against the Sheriff’s Office in June of that year. The ACLU claimed the Sheriff’s Office wasn’t offering inmates who weren't pregnant beneficial medications such as buprenorphine or naltrexone, in violation of the Americans with Disabilities Act.

By mid-2019, the jail’s MAT program had been formalized in a settlement agreement between the county and the ACLU. While the county did not admit wrongdoing in the settlement, it agreed to support inmates with opioid use disorder by providing them with medications that have been shown to ease the pain of withdrawal and reduce the risk of future overdose deaths.

The relatively new jail program confronts a drug epidemic that will need to be fought on several other fronts if it is going to be stopped.

The fentanyl death rate doubled in Washington state from 2019 to 2020, according to the Addictions, Drug and Alcohol Institute at the University of Washington. Statistics from Whatcom County suggest the problem has only gotten worse since then, at least locally. Total fentanyl deaths in the county increased from 15 in 2020 to 25 in 2021.

“Whatcom County, Washington state and the entire United States are facing a public health emergency, causing tens of thousands of overdose deaths due to the emergence of fentanyl,” said Mark Cooke, an ACLU attorney who worked on the settlement with Whatcom County. “The ACLU of Washington believes in a public health approach to substance use disorders and that access to low-barrier services like MAT are a crucial component to saving lives.”

As the fentanyl epidemic was tightening its grip on the state, the county jail was expanding its MAT program.

“The jail’s new (as of January 2022) physician is licensed in family medicine and addiction medicine,” a Sheriff’s Office email said. “This has allowed the program to expand.”

The state Legislature has recognized the problem, budgeting $10 million over two years for a statewide program to provide medication to jail inmates with opioid use disorder. The state Health Care Authority noted that the program reduces the likelihood of repeat criminal behavior by helping people get off fentanyl or heroin.

Alcohol is abused more than any other chemical within the jail population, according to the Sheriff’s Office email. Setting alcohol aside, inmates typically enter the jail as users of multiple drugs: heroin, fentanyl and methamphetamine most commonly, or meth and one of the two opioids.

Around 80% to 85% of inmates have some type of substance abuse disorder, the Sheriff’s Office said.