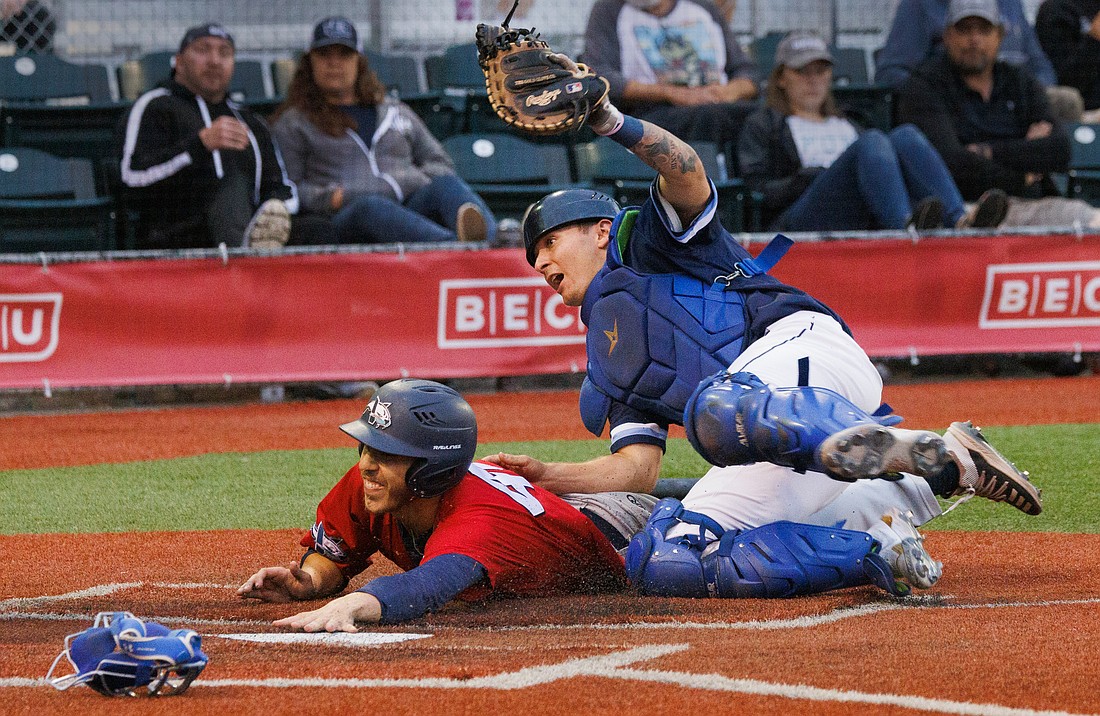 Bellingham Bells catcher Blake Conrad gets flipped around while making the out at home plate. The Bells lost to the Victoria HarbourCats 8-6 on Aug. 3. (Andy Bronson/Cascadia Daily News)
By HAILEY PALMER
Staff Reporter

After wrapping up the regular season with a 7-3 victory, and series win, over the Kamloops NorthPaws, it’s time for the Bellingham Bells to ring in the playoffs.

Bellingham enters the playoffs as the West Coast League North Division’s top seed after winning the division’s first-half championship. The Bells’ 33-20 record to close out the regular season kept them atop the North Division standings and was good for third-best in the league behind the Corvallis Knights and Portland Pickles.

Through the first eight games of the season, the Bells were an even 4-4. From there, they went on a tear. 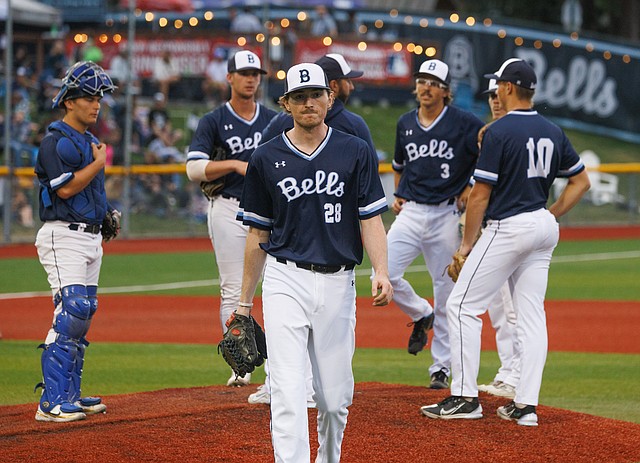 Pitcher Calvin Wood walks to the dugout as the Bellingham Bells lost 8-6 to the Victoria HarbourCats on Aug. 3. (Andy Bronson/Cascadia Daily News)

Bellingham went on a 10-game winning streak, part of a 13-1 stretch in late June, that catapulted it to the top of the standings where the team would stay the rest of the season.

Strong pitching and a high-powered offense defined the first half of the season for Bellingham.

Starting pitcher Trevin Hope led the league with a 2.24 ERA and was second in strikeouts with 48 in the regular season. Hope was second on the team with four wins and was 4-1 overall on the mound.

First on the team in wins was Ryan Beitel from the University of British Columbia who posted a 5-2 record. Beitel appeared in 12 games with six starts this season. He recorded 41 punchouts to only nine walks to go with a 3.57 earned run average.

Recent additions Easton Amundson from Lower Columbia College and Malcom Moore from Stanford University have provided the offense with a much-needed boost in the second half. 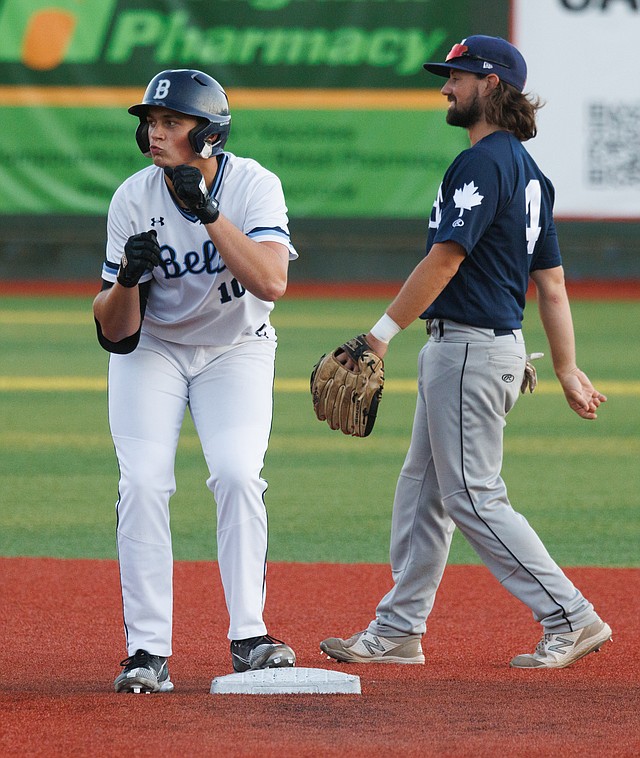 Malcolm Moore does a dance after getting to second base on a hit as the Bellingham Bells beat the Victoria HarbourCats 8-3 on Aug. 4. (Andy Bronson/Cascadia Daily News)

The constant cycle of players coming and going isn’t unique to the Bells, it’s just the nature of college summer baseball as players head back home for various reasons throughout the summer.

One of the Bells’ offensive leaders for much of the season, infielder Elijah Hainline, had to leave the team early due to an injury, while other players had previous commitments coming into the season.

This seemingly never-ending shuffle of players makes it hard to create consistency. 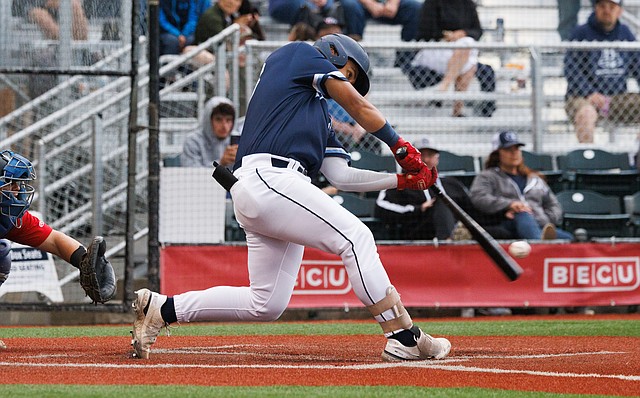 Chandler Tuupo drives in a run as the Bellingham Bells lost 8-6 to the Victoria HarbourCats on Aug. 3. (Andy Bronson/Cascadia Daily News)

The Bells struggled in the second half but were able to maintain their top spot in the North Division.

Whether or not those struggles could be attributed to the team securing a playoff spot early and taking their foot off the gas remains unknown, but the up-and-down second half from the Bells is now behind them with the postseason in view.

Right in front of the Bells now are the Victoria HarbourCats, a team they were 3-3 against during the regular season.

The Bells’ and HarbourCats’ paths to the playoffs couldn’t be more different. Victoria secured its spot on the last day of the season while Bellingham has been waiting to know who its opponent is since the end of June.

The two teams just played each other in a three-game series in Bellingham Aug. 2–4, with the HarbourCats winning two of three games.

Earlier in the season, the Bells won two of three games in Victoria, so a true rubber match between Victoria and Bellingham is in store this week.

The winner of the two-game series moves on to a single-game series against the winner of No. 2 seed Wenatchee and No. 3 seed Kamloops. The winner of that will play the final team left from the South Division for the West Coast League championship. Times and dates for playoff games beyond the first round are to be determined.