On big limbs — and small branches of democracy 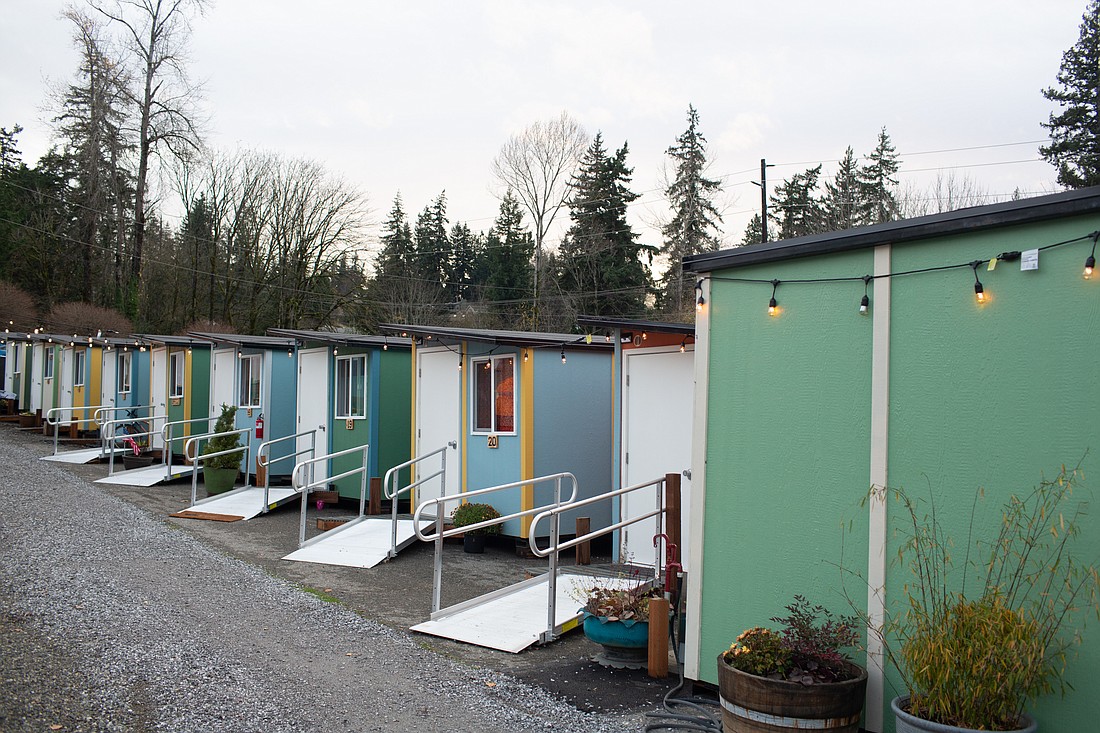 The Gardenview Tiny Home Village, home to as many as 50 people, stands on the ground of the city's former Clean Green facility at Woburn Street and Lakeway Drive. (Hailey Hoffman/Cascadia Daily News)

In a place filled with grand parklands and jaw-dropping vistas, the piece of property never really looked like much.

The parcel sandwiched between Woburn Street and the race track calamity known as Lakeway Drive was a leftover, never quite suitable for the fate of every other patch of land in our midst (multi-story apartment complex.)

From 1989 to 2016, it was an institution somewhat beloved by ‘Hamsters with dirt 'neath their nails: the “Clean Green,” a garden-debris disposal site that allowed local gardeners and homeowners to deposit limbs, leaves and other debris close to home. Today, it’s the Gardenview Tiny House Village, a home base for some 50 local folks.

No sane nor certainly compassionate person would argue that past use trumps present. Limbs are debris, human souls are precious. Net win in trade there, albeit accidental, with a major karma surplus. A few back pats for that successful project help the city gird for the far-broader homelessness tasks ahead.

Still, the semi-recent past of that parcel is worth considering in the context of its present. The land’s evolution says, in fact, a lot about the truly staggering pace of change in Bellingham, which often goes unappreciated.

The long view makes that site look a lot like a civic fumarole vent — that rare crack in the local political crust where what boils beneath occasionally bursts forth into the open, stinging our nostrils with acrid steam of angst.

The 2016 closure of the Clean Green unleashed what then qualified as a fairly rare, spirited civic spat, with members of the oft-lock-stepped City Council engaging in actual argument in public, back when in-person meetings qualified as such.

Some members of the Council were inexplicably bent on closing the facility, which had become an increasing cost after Whatcom County pulled back $50,000 a year in support. It wasn’t, they decided, “self-sufficient” (an interesting new standard for taxpayer-supported government programs, to be sure.)

City staff recommended then that the facility’s services be replaced by two “free yard waste disposal opportunities” (now a distant memory). The rest of local landowners’ yard waste could be hauled to private facilities in Ferndale and Lynden for disposal or composting — or dumped in one of the little Barbie-sized toters for food scraps and lawn clippings provided by the city’s guaranteed-profit disposal contractor, Sanitary Services Company (go ahead, try it.)

The latter suggestion prompted a memorable outburst from Council veteran Terry Bornemann, who exclaimed, in trademark arm-waving fashion, something to the effect of: “It’s a jungle out there! Stuff around here grows and grows and grows and …”

His point: There really was no viable alternative for local folks to dispose of the sort of blackberry and bramble tonnage that results from a typical year’s growth here in Rainland. And while he was on the losing end of the vote to shut the Clean Green, Bornemann was right.

Local folks are reminded of this on a naggingly regular basis, here in oh-so-green Bellingham, when they regularly truck waste in individual vehicles roughly 20 miles roundtrip for disposal, rather than dump in a common facility to have it hauled off in a single truck. Pennywise, pound foolish, both in funds and carbon impact.

While the decision was understandable, “It was very upsetting to many people in the community,” the city's current public works director, Eric Johnston, said last week.

He's doubtful about short-term solutions but noted that the city's current “diversion rate” of organics from its waste stream, at 30% to 35%, is insufficient compared to neighbors such as Seattle, where it's twice that. Compostable waste writ large remains on the table, both in the city and county governments.

Little solace in the short term to the city's long-haul limb truckers, no doubt. The city basically stepped in it with the Clean Green.

But notably, Bornemann, now retired after 20 years of council service, wouldn’t rise an inch toward the bait of I-told-you-so. He believed his opposition was valid, and that he was speaking for his neighborhood constituents and city residents in general. But he also understands the context.

“At the time, I felt like it was within the purview of a service the city should provide,” he said.

Like the country, Bellingham only six years ago was another time on another planet. Bornemann was right then about waste disposal, and he's right about current priorities. It’s arguably foolish to suggest that civil servants should be spending time deciding how to shred limbs given the city’s other recent maladies — need we repeat: homelessness, crime, social inequities and housing costs — stare them daily in the face.

Point made, accepted, embraced. Times are troubled, democracy literally twists in the wind, bigger fish await frying, and the oil is cooling as we speak.

All that said, the greater good is not served — and solutions to said large-scale problems are not likely to be engaged with sufficient civic buy-in — if workaday tasks of government are simply ignored.

Limbs matter, a little, and a lot to some people. So do speeding cars, potholes, failure to investigate and prosecute crimes and other daily irritants — especially in a place with a skyrocketing cost of living, accompanied by commensurate boosts in taxes reflecting assigned property values. Inattention to concerns about all the above, perceived or real, matters when it comes to local-government cred — an increasingly precious commodity.

The Clean Green, to many a longtime local with a rusty pickup bed and a couple acres of jungle, was another little broken government promise. Like the annual property tax assessment from the county, these add up.

Bellingham residents, in general, are pretty hip to civic finances and difficulties. But in this case, some were struck by the utter disregard by the city for what could have been — and still could be — more creative solutions, such as convincing the city waste contractor to step up with a solution that benefits residents and the planet.

The point: In a city bent on asking local taxpayers to invest increasing tax dollars to combat truly global problems, limbs and curbs and lighting and all the like are trickles in a torrent. They are, in fact, textbook first-world problems. But distrust in, or rejection of, local government is not. Once lost, that’s not easily retrieved, and the balance these days is delicate.

A jungle out there, indeed. Pay heed to the vipers.