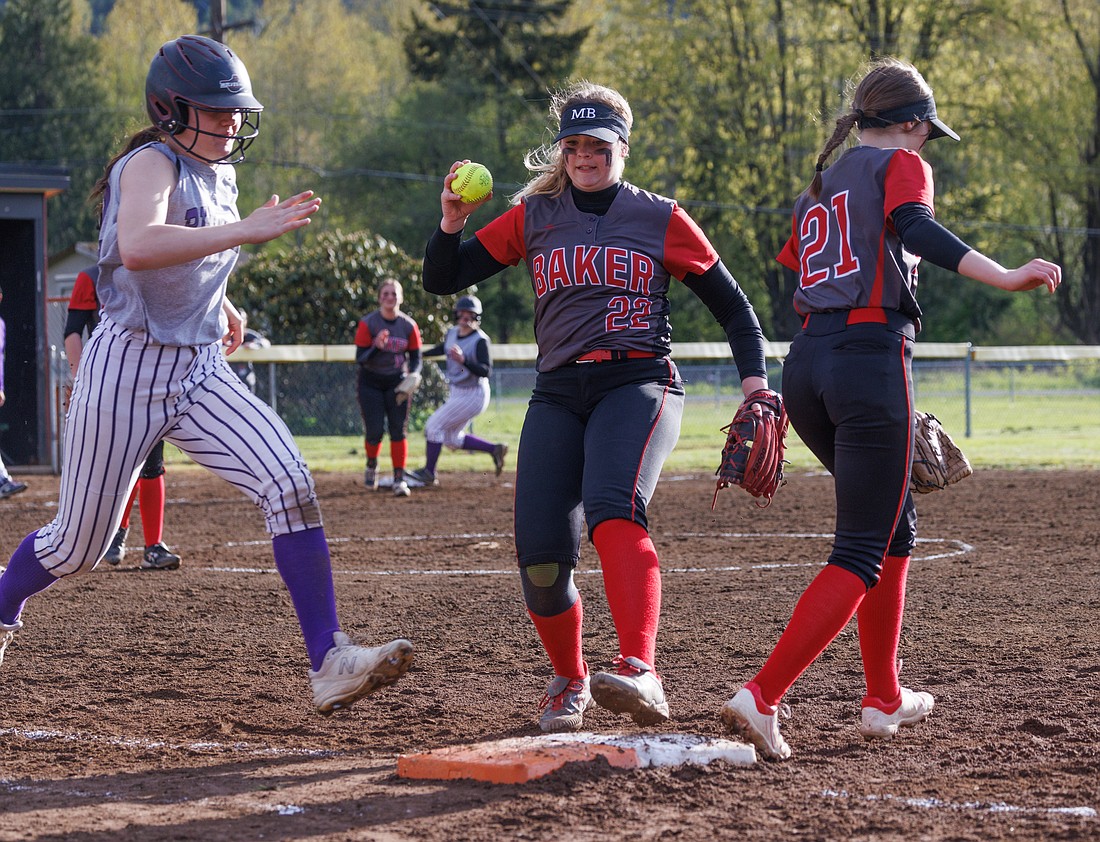 Senior pitcher Jordyn Relethford sat down the first 13 Mount Baker batters she faced before giving up her first hit of the game.

The Pioneers wasted no time in the matchup of the Northwest Conference’s top two teams, scoring two runs in the top of the first inning.

Relethford hit an RBI single off Mount Baker pitcher Ava Jeretzky’s foot to bring in a run, and sophomore Lainey Kimball wore a pitch with the bases loaded to bring in the other. 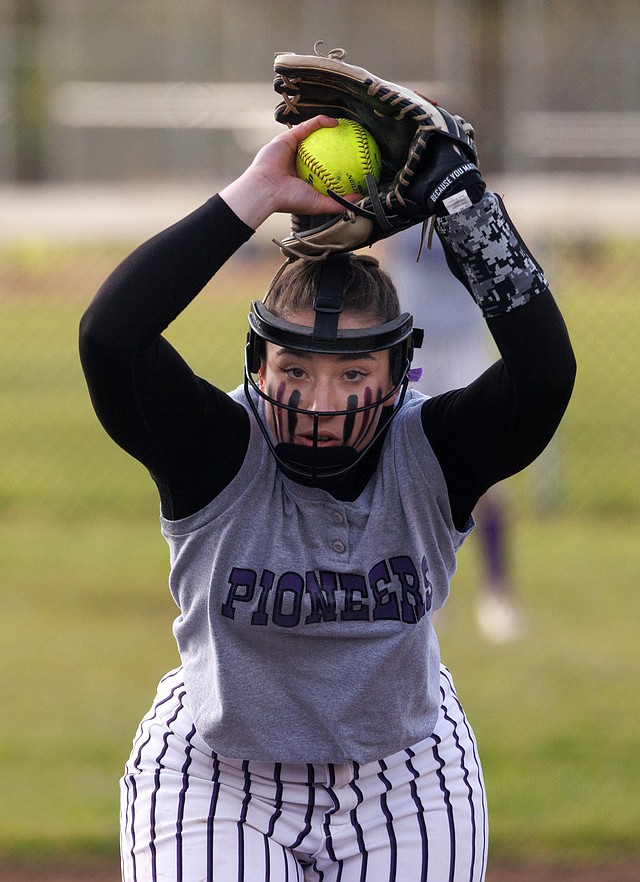 Nooksack Valley's Jordyn Relethford winds up for the pitch as she struck out 12 batters in the Pioneers’ win over Mount Baker 10-1 on April 27. (Andy Bronson/Cascadia Daily News)

Nooksack Valley added to its lead in the top of the third on an infield single by Ellie VanBerkum to make the score 3-0.

The Pioneers’ offense was far from done there. Junior Sierra Anderson and Kimball both hit home runs and by the end of the sixth inning, Nooksack Valley led 10-0. 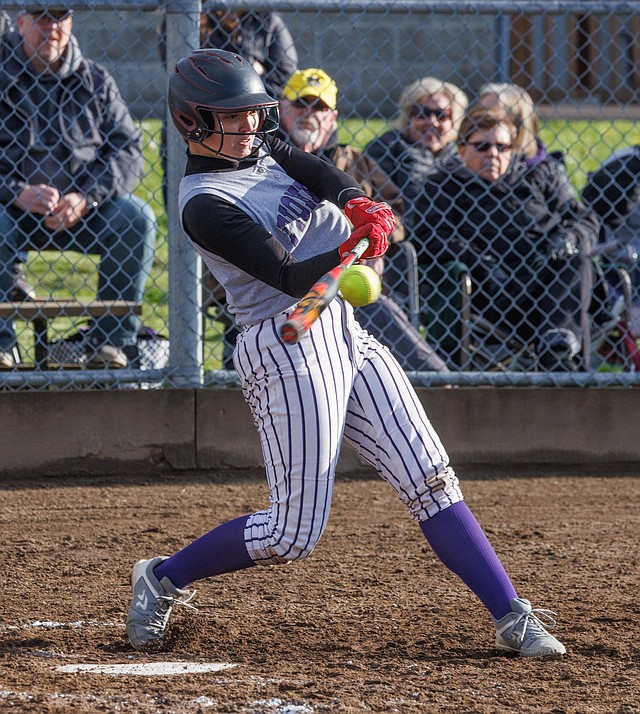 Mount Baker’s lone run of the game came on a squeeze bunt by senior Madison Barter.

“This is the time of year you want to play high competition and want to go out and take a challenge, and we didn’t play as well as we were capable of today,” Mount Baker head coach Ron Lepper said. 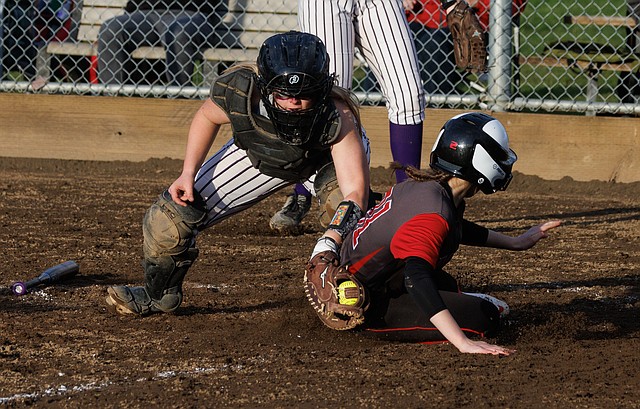 Mount Baker's Lauren Valum scores the only run for the Mountaineers as they fell 10-1 to Nooksack Valley on Wednesday. (Andy Bronson/Cascadia Daily News)

Relethford earned the win in the pitcher’s circle, giving up only one run in a complete game effort. She finished the game with 12 strikeouts.

“I was just thinking 'I didn’t want to give them anything down the middle.' I was not going to hang anything for them,” Relethford said of Mount Baker’s lineup.

Harmon said with a lineup as powerful as Mount Baker’s, they kept the approach simple in how they wanted to attack them.

“We wanted to do well and make them hit ours and not give in when they got ahead in the count,” he said. “They have some really good hitters and we were just fortunate today.” 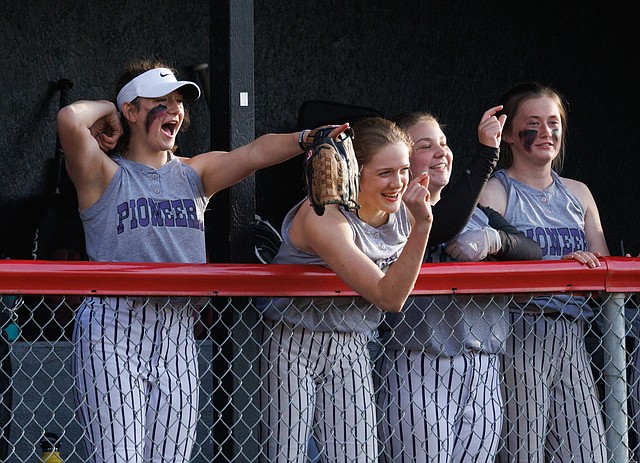 After the ball bounces against the outfield fence, Nooksack Valley players tease a teammate after she misses a home run by inches. Nooksack beat Mount Baker 10-1 on April 27 in Deming. (Andy Bronson/Cascadia Daily News)

Lepper said while the scoreboard was disappointing, the Mountaineers have good competition left in the regular season, which is what they want with the postseason right around the corner.

“We knew us and Nooksack are going to be high seeds in districts,” Lepper said. “Now, we have to refine a few little things and make sure we come out ready to go.”