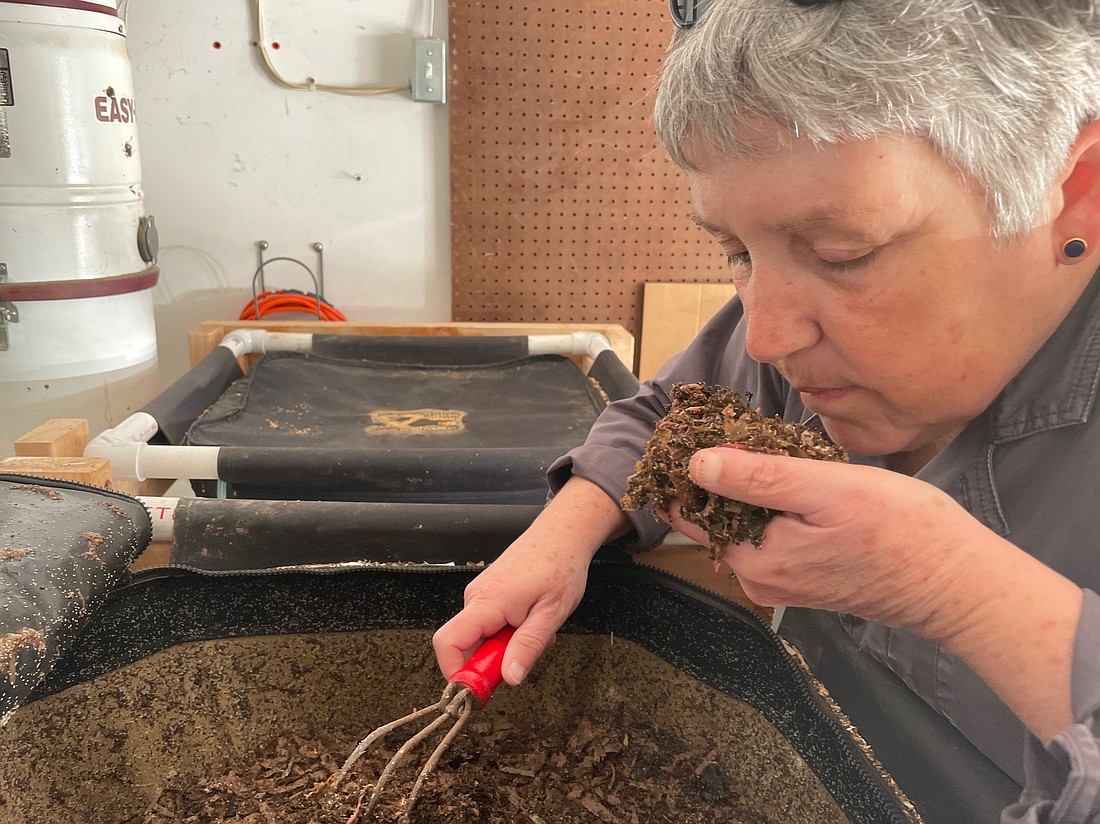 Nancy Neil investigates her worm farm, "Wriggley Field." Because the red wigglers are so adept at breaking down food waste, there is little odor. (Amy Kepferle/Cascadia Daily News)
By AMY KEPFERLE
Staff Reporter

For Nancy Neil, every day truly is Earth Day.

The self-described “worm lady” has spent the past 15 years perfecting a composting system that not only drastically reduces household food waste but also produces rich, loamy soil that she uses in her vegetable garden.

The secret to Neil's success can be found in two large garbage-bag-sized canvas containers hanging from a wooden rack in the neat-as-a-pin garage attached to her house off of Chuckanut Drive. When opened, the bags reveal countless red wiggler worms who are fed the vegetable and fruit scraps that accumulate in Neil's freezer every week. Each worm is a descendant of the first batch she ordered off the internet after a local woman she met taught her how to operate a table saw to build her first bin. 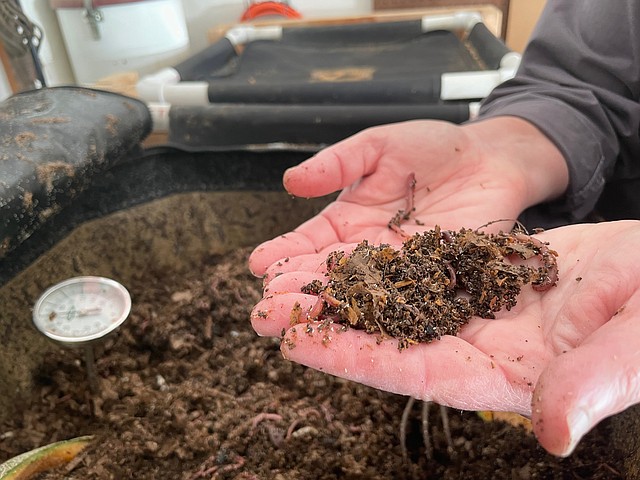 Nancy Neil keeps an eye on the temperature of Wriggley Field. As long as the soil doesn't go below 32 degrees, or above 80 degrees, the worms will survive. (Amy Kepferle/Cascadia Daily News)

“I ordered 1,000 online, and I probably have tens of thousands now,” Neil said, working a trowel through the soil to bring the critters to the surface. She'd placed cantaloupe slices on the top of each container to entice “Stanley” — the collective name of the worms residing at “Wriggley Field”— and was eager to demonstrate how the most common composting worm in the world gets down to the business of producing soil while also reproducing.

After opening the bottom of the bag to harvest some of the worm's castings (also referred to as “poop” or “black gold”), Neil worked through the soil to find a variety of sizes of wigglers to show how they operate. Worms are hermaphrodites, she said, meaning they have both male and female parts that allow them to intertwine and exchange genetic information.

“Both worms get pregnant,” Neil said. “I think it's the only fair way. Both worms will lay a cocoon, and the cocoons have between three and five baby worms in them. The worms hatch, and the process repeats.”

The circle of life continues in Neil's garden, where a covered metal bin acts as a repository for the harvest of worm castings and the worms and eggs that remain. After adding a bucket of chopped-up leaves from one of four tumbling compost bins located at her property line, the process is nearly complete. 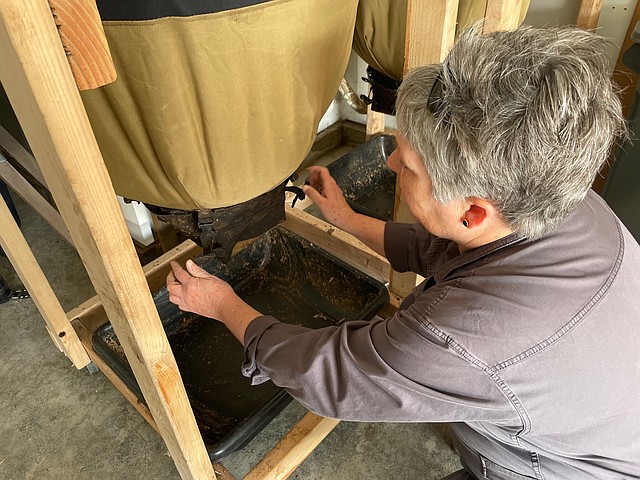 Nancy Neil harvests worm castings from below the canvas bins. Because worms feed from the top, there will be less of them in the harvest. (Amy Kepferle/Cascadia Daily News)

“It's cellular self-sufficiency,” Neil said. “All these leaves are going back in the garden to feed the vegetables. Whatever worms are left, it gives them something to eat and keeps the bin from getting dense at the bottom. Next time I harvest, I'll add another layer on top. I've already harvested once to get my garden beds ready.”

In the raised metal garden beds, Neil is currently growing spinach, kale, chard and fingerling potatoes. When the weather warms up, she'll add tomato and pepper starts to the two beds that get the most sun. Using the hugelkultur method — which focuses on building garden beds from partially rotted woody material topped with compost and soil — Neil also adds bunny poop, straw, paper and kitchen scraps to the bottom of the beds.

“You don't feed the plants, you feed the soil,” Neil said. “It's the microbiology. Even the worst soil has nutrients that the plant needs. They just can't access it. You need the microbes to be interacting with the soil.”

Earthworms also make their homes in the garden beds and do the work of creating tunnels that make it easier for the smaller wigglers to travel. And because the wet, rotted wood waters the soil from below, Neil rarely has to hydrate her plants. As a further measure, unglazed terra cotta pots called ollas are placed in the center of each bed. When filled with water, the plant's roots gravitate toward the slow seepage from the pot. 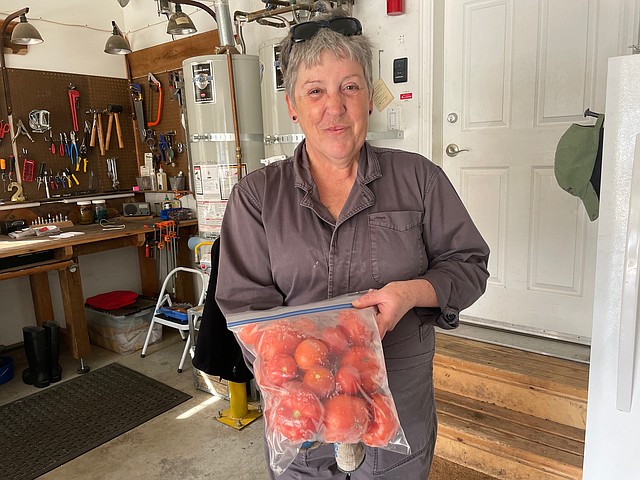 Last summer, Nancy Neil harvested more than 40 pounds of Early Girl tomatoes grown from two plants. When thawed, the skin peels off and they're ready to use. (Amy Kepferle/Cascadia Daily News)

Neil knows that not everybody is as passionate about worms as she is, but still thinks that people who want to experiment with them in their gardens shouldn't be afraid to do so. She posits that if someone started out with 100 worms, fed them and made the environment good for them, then they are going to reproduce.

“Start small,” she said. Find a bin — like one used for recycling, and put a small grow bag inside. Add leaves, bedding, a quart of worms and top it with a sturdy makeshift lid.

Neil is the sole supplier of worms at Hardware Sales, so to avoid buying them from the internet, simply head to the Bellingham-based hardware store, go to the gardening section and ask for Wes. He'll supply a takeout container of Neil's worms with a stamp that says “Live from Wriggley Field,” and the adventure will begin.