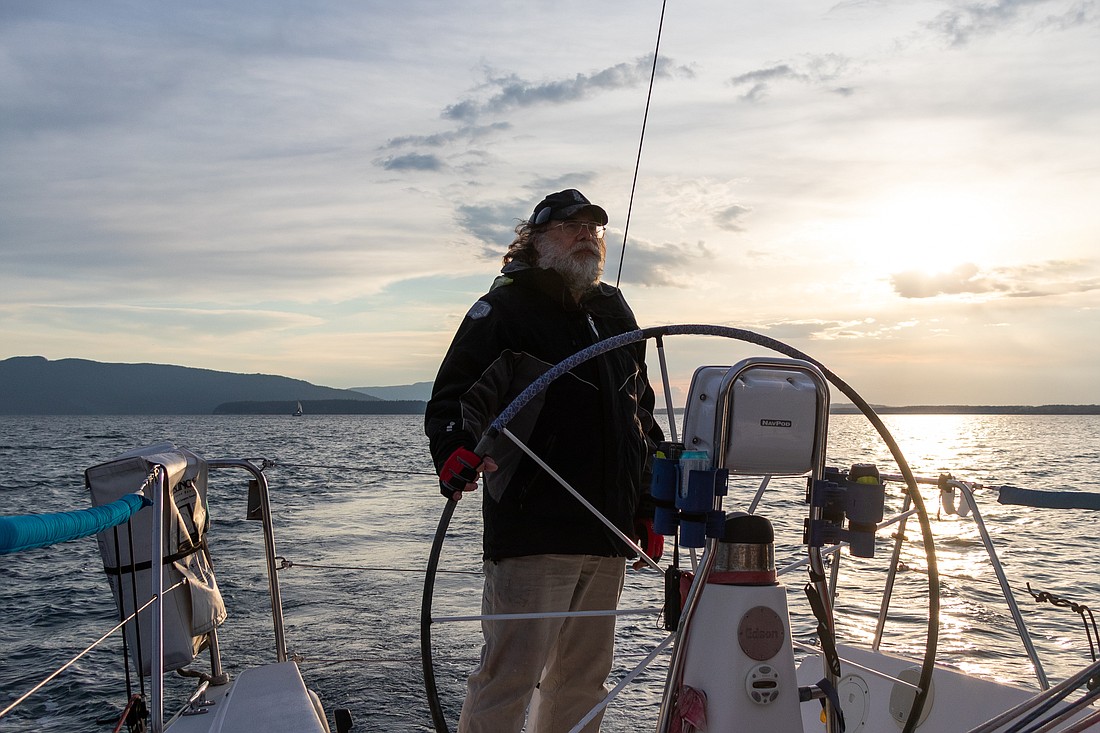 Corinthian Yacht Club sailors took to Bellingham Bay Thursday evening and glided through their first race of the season.

April 14 marked opening night for the 15 boats that participated in the races. At 6 p.m., the first division of five racers waiting at the starting line opened their sails and took off toward the outfall buoy. The race was split into three divisions with five boats racing in each.

Racers must circle the outfall buoy, make their way back to the starting line, then repeat a second lap. To get to the outfall buoy, the boats tack upwind, a practice where the boat's head switches direction so it can sail upwind while staying on course. 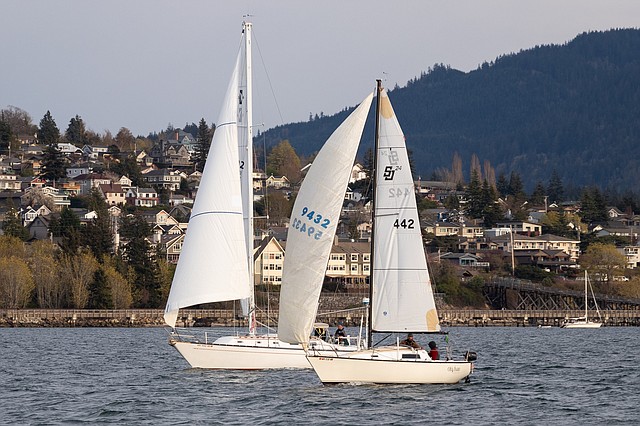 After the larger boats in the first two divisions finish tacking upwind, make their way around the outfall buoy, and begin sailing downwind, they quickly open their spinnakers. Spinnakers are large, colorful, triangular sails that fill with wind and balloon out in front of the boat to help it quickly move in the direction of the gusts.

The race committee boat judged the race from the starting line and was made up of various club members. The sailboats raced from 6 p.m. to 7 p.m. across the bay, passing by Boulevard Park. 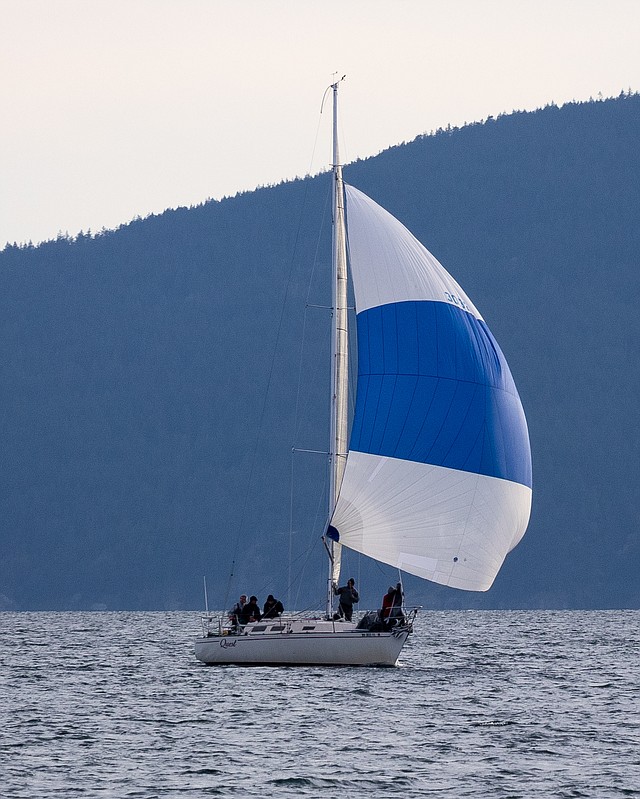 The sailboat, Quest, opens its spinnaker to catch the wind and propel the boat downwind. (Kyle Tubbs/Cascadia Daily News)

While sailboat racing has some time for snack breaks and the occasional beverage, it requires speed and skill.

On the sailboat Hravn, the crew worked together to repeatedly raise and lower sails and moved as fast as they could while the boat heeled from one side to the next while tacking. The skipper directs the rest of the crew while they maneuver across the deck, shouting to one another, pulling lines and balancing out the boat. 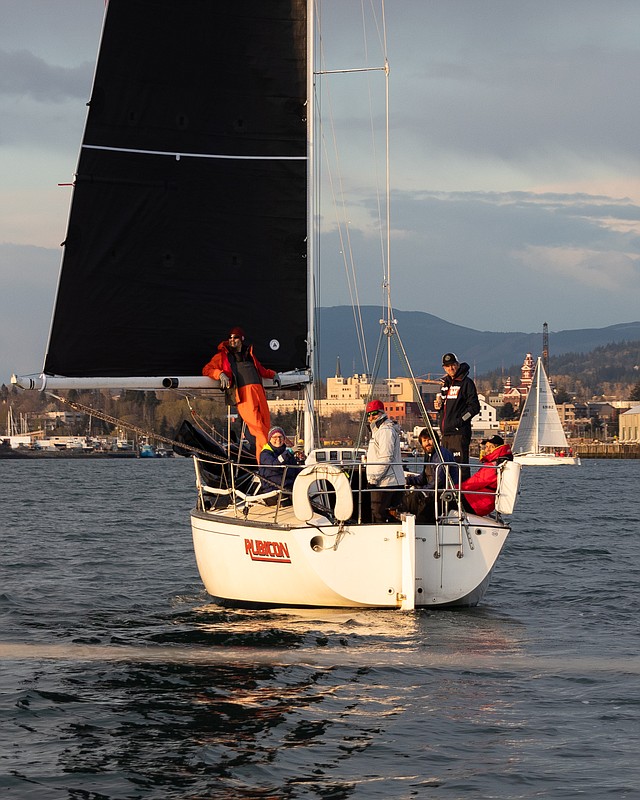 Skipper Dave Klingbiel and the crew of the sailboat Rubicon triumphantly head back to the Squalicum Harbor after placing first place in the second race division. (Kyle Tubbs/Cascadia Daily News)

“Get ready to tack,” Hravn skipper Todd Koetje yelled to the crew while they were gripping different lines, waiting for the sail to swing from one side to the other and catch the wind.

Sailing, especially while racing, is a whole-crew effort and one that requires each member to pay attention and remain coordinated. When the boat tacks, the sail fills with wind and makes the boat heel toward the direction of the wind. 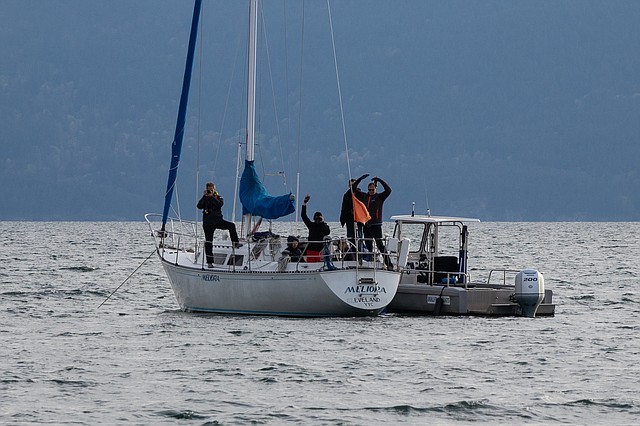 The crew of the committee boat waives to the crew of the sailboat Hravn as they pass by and begin the race. The committee crew acts as the judges of the race and also marks the starting line. (Kyle Tubbs/Cascadia Daily News)

The crew must then sit on the part of the boat raised out of the water to balance it, but the 10- to 30-degree angle makes walking on the deck an extra challenge. The boom, to which the sail is attached, will swing fast with force as it switches directions.

Koetje has some rules for people on his boat while racing but the most important rule is “stay on the boat,” Koetje said. “The first rule of sailing since time immemorial.”