Neighbors appear to hit dead-end in impasse with city 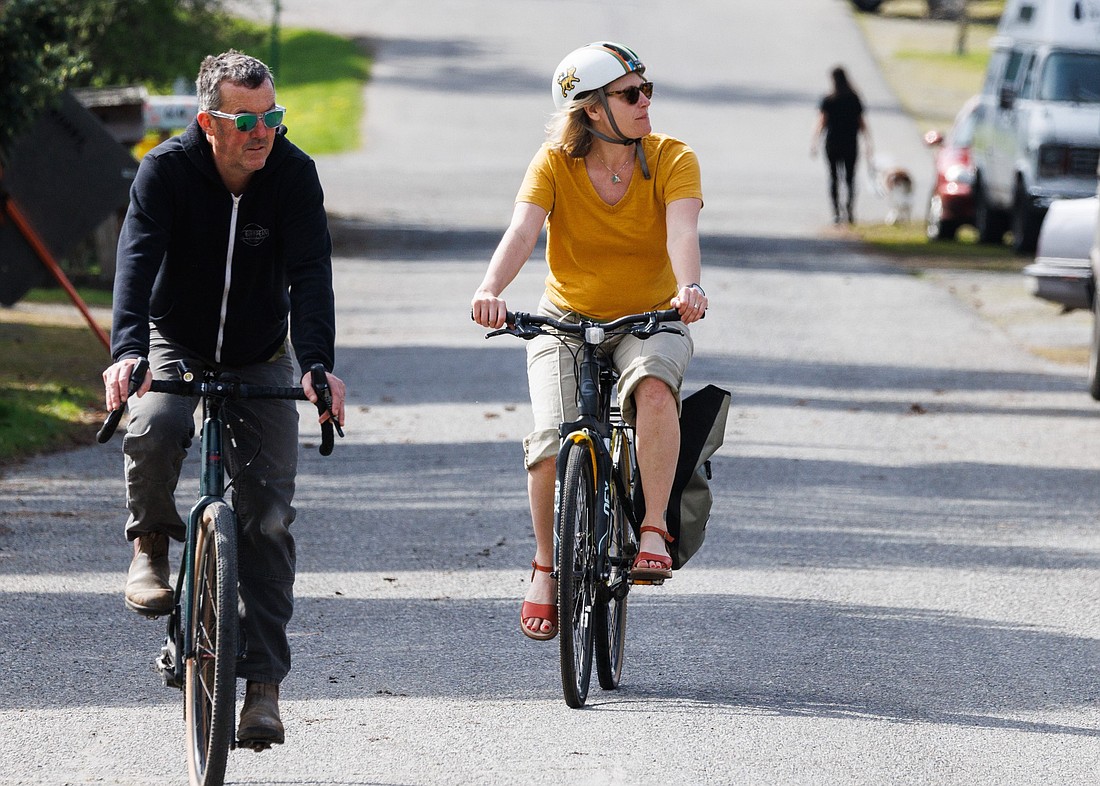 Bikers and walkers enjoy the slow pace of Donovan Avenue in Fairhaven on April 7. Neighbors worry an 80-foot sidewalk to be built at 801 Donovan will disrupt the neighborhood's character. (Andy Bronson/Cascadia Daily News)
By RALPH SCHWARTZ
Staff Reporter

A narrow creek and a tree-covered berm is all that separates residents on the south end of Fairhaven from the popular shops and restaurants that define the neighborhood. But they feel like they’re a world apart.

Pedestrians in the busy part of Fairhaven scamper over crosswalks at four-way stops, eager to reach the safety of a curb and sidewalk as cars seemingly come at them from all directions. But when neighbors on the other side of Padden Creek heard the street along 801 Donovan Ave. would get 80 feet of sidewalk, they essentially revolted. Their part of Fairhaven has never had a sidewalk, anywhere, anytime.

“It flies in the face of history and overwhelming community sentiment,” said Bill Liddicoet, a four-year resident and a member of the Fairhaven Neighborhood Association board.

Spend even a fraction of an hour in this quiet corner of Fairhaven — bounded by Fourth Street to the west, Cowgill Avenue to the south and Padden Creek to the north and east — and it becomes clear that the road sees more foot, paw and hoof traffic than it does vehicles. The deer and the dog-walkers routinely outnumber the cars on this stretch of Donovan — a happy result, neighbors say, of the city’s decision three decades ago to build a berm separating the west end of Donovan from busy Old Fairhaven Parkway.

Before the berm, Donovan was the thoroughfare that got people to the Bellingham Cruise Terminal and the industries on Fairhaven’s waterfront. Some 2,000 vehicles used that road every day, said neighbor Wayne Hagan, who moved there in 1990. He remembered some of those cars speeding past people’s homes at 50 mph.

Now, the few cars that do find themselves on the lower part of Donovan — mainly immediate neighbors and their guests — are in the habit of crawling along the street, wary of children who might be playing basketball, or neighbors in the middle of the road enjoying that most precious of social commodities these days: face-to-face contact.

“If you want your real estate values to go up, you have kids playing basketball in the street,” Hagan said. 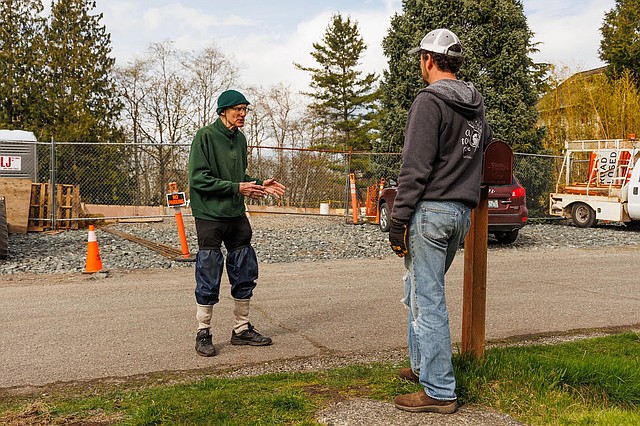 Wayne Hagan leans on his mailbox April 7 on Donovan Avenue in Fairhaven as he talks with Preston Schiller about a sidewalk to be built across the street. Neighbors worry the sidewalk will disrupt the neighborhood's character. (Andy Bronson/Cascadia Daily News)

A group of 17 neighbors signed their names to a March 6 letter expressing their concerns to Bellingham Mayor Seth Fleetwood. They asked for a “moratorium” on sidewalk construction until the mayor and the neighborhood had the opportunity to consider all options.

The neighbors pointed out that their anti-sidewalk sentiment had been put in writing. The Fairhaven Neighborhood and Urban Village Plan includes a policy stating that this “older residential area” should not be improved with curbs, gutters or sidewalks (all of which are included, typically, in a street-improvement package).

Fleetwood came to the neighborhood later in March to hear neighbors out, and left them feeling “guardedly optimistic,” as Liddicoet put it.

“I have met with several neighbors and am sympathetic to their perspective,” Fleetwood said in an April 8 email to Cascadia Daily News. “My staff and I are looking at what options exist that meet city requirements and satisfy the neighbors’ wish that this area retain its unique and distinctive feel.”

A 14-day appeal period came and went after plans for the 801 Donovan fourplex project were finalized — sidewalk and all — with nobody challenging them, Lyon said.

“There is no mechanism that I possess, that the City Council or mayor possesses, to somehow stop or intervene or prevent that from moving forward,” Lyon told Neighborhood Association members.

Lyon passed along what city attorneys told him: The governing rule is a chapter in the municipal code that says essentially every street in Bellingham must have curbs, gutters and sidewalks.

As the discussion over Zoom wound down, the patience and politeness neighbors had shown throughout the meeting started to fray. They told Lyon, who started his planning director job on March 1, they had seen plans for the project several months earlier that showed a gravel path along Donovan. After neighbors reviewed those plans, the sidewalk was added without their knowledge.

“The city has a credibility issue,” Tom Dolese said at the Neighborhood Association meeting. “It’s a failure of a democratic process. You can maybe blame it on bureaucracy, or rules or laws, but we can do better than that.”

Some of the strongest language came from Fairhaven board President Brooks Anderson, who said neighbors see city staff as “liars” and “cheats” who don’t do what they say they’re going to do.

“The code needs to be changed,” Anderson said. “We need to have more ability to have the city staff and the City Council and the mayor really respond to us, rather than it just being a one-way street.”

Or, in the case of Donovan Avenue, a street with sidewalks.