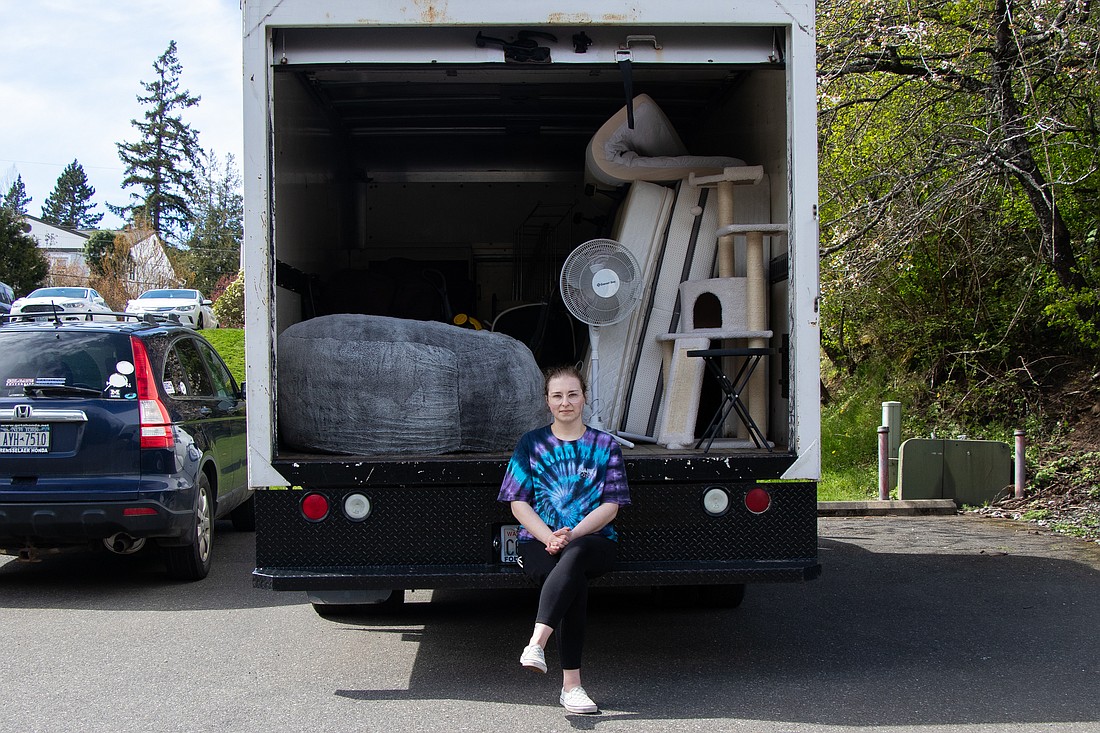 Sydnee Smith sits in front of the last of her belongings she moved out of her mold-infested apartment April 10. A hole in the laundry room wall and ceiling revealed a forest of mold with roots climbing up the inside of her apartment's walls. Smith was forced to leave the apartment while the mold was exposed, unable to withstand the ensuing sickness for more than 10 minutes at a time. (Kyle Tubbs/Cascadia Daily News)
By AUDRA ANDERSON
News Producer
By RALPH SCHWARTZ
Staff Reporter

Bellingham renter Sydnee Smith, 22, was home alone in her Happy Valley apartment the evening of March 16, wide awake due to an incessant plopping noise that had started the night before.

When she went looking for the source, she discovered a crack in the laundry room ceiling, methodically dripping water into her cat’s litter box.

About a week before, Smith and her roommate, Michaela Heuslein, had noticed a manure-like smell emanating from the complex, located at 927 22nd St. Others in the building had noticed it, too, and reported it to Landmark Real Estate Management, one of Whatcom and Skagit counties’ largest property management companies, according to its website.

After finding the crack, Smith called Landmark’s emergency line and was told a maintenance person would be there shortly.

A maintenance man came to look at the leak on March 18, knocking a small hole in the wall. He incorrectly identified the source as an upstairs apartment, occupied by soon-to-be evicted residents.

Smith said the remainder of the month of March was chaos.

“It has been affecting every part of my life,” Smith said. “I’ve been crying at work, constantly trying to have my phone on me at work, which I’m not supposed to … Both my roommate and I have been so stressed out. And I work two jobs. I haven’t felt like I had a day off in weeks.”

As the leak worsened, Smith and Heuslein were told by Landmark to break their lease and “be done with the place.” Smith said it would not be possible to sign a new lease for a different rental, given both she and Heuslein planned to move away from Bellingham when their lease ended in July.

Smith asked if Landmark could help them secure a hotel room or prorate the rent for time spent out of the apartment. The answer was no, but the company said they were looking for another unit the women could rent.

Another maintenance man showed up at the complex on March 28 and said the leak was coming from a different upstairs unit.

The next day, Heuslein gave permission to a maintenance man to enter the apartment while she and Smith were at work. He called Heuslein back and said “he was leaving and it was really bad and he’d need a team” but gave no specifics, Smith said. 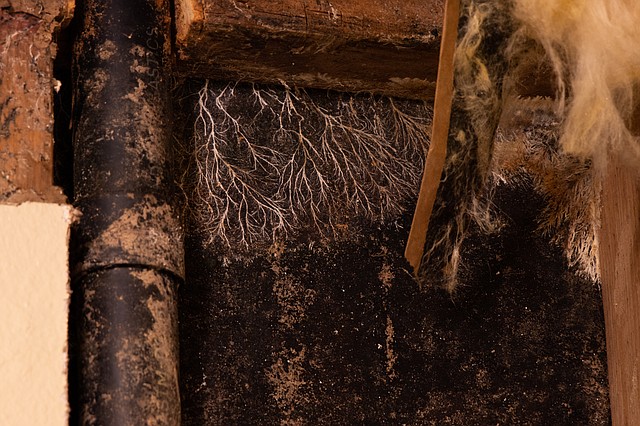 When Heuslein returned, she found that the maintenance man had knocked an area of the wall and ceiling out revealing a forest of mold, with roots traveling up the wall stud. Smith raced back to the apartment and the pair quickly gathered their essentials and left to stay at their boyfriends’ houses.

Landmark offered Smith and Heuslein a one-bedroom apartment that cost $100 more per month than the $1,250 they were paying for their two-bedroom Happy Valley unit. Aside from the increase in rent, the two women would need to share a bedroom until July. It wasn’t doable, Smith said.

Fed up with inconsistent communication and vague answers, Smith went to Landmark’s office in Barkley Village. A property manager arranged for a $1,250 two-bedroom apartment for Smith and Heuslein within a few hours.

But they still had to tackle moving out. Smith said she could not be inside their former apartment for more than 10 minutes before the headache, coughing, chest tightening and smell overwhelmed her. At one point, she briefly blacked out inside the apartment.

“I don’t think that our health and safety was taken into account at all,” Smith said. “I feel like we were completely taken advantage of.” 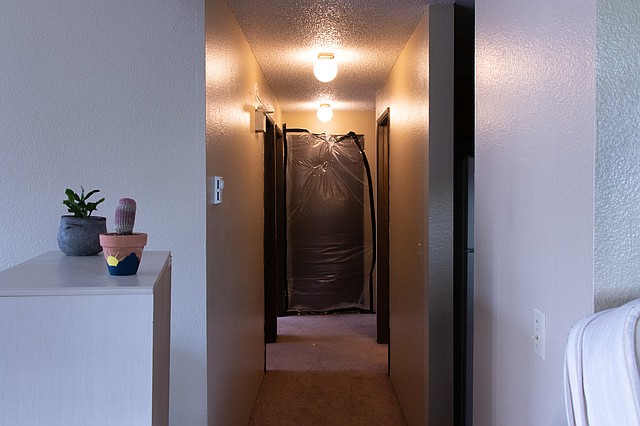 Smith is not the first tenant of the 927 22nd St. complex to experience mold growth in her apartment. Bellingham resident Johnny Potter, 26, lived in the complex from 2015 to 2017. Potter said when they moved in, mold was on the lining of the windowsills.

Potter said the cause of the mold was primarily due to a laundry vent that was not hooked up, causing condensation to collect. However, after the laundry vent was addressed, mold continued to accumulate due to leaks around the windows.

“When our mold persisted, our landlord said he would paint it over,” Potter said. “I pointed it out to him, and he said, ‘Yeah, that happens, we just paint over it.’”

Landmark did not respond to multiple requests for comment.

“It’s one of the biggest problems we have and it’s only going to get worse as climate change gets worse and flooding becomes more of a problem,” Villalba said.

The rights of tenants and landlords are both outlined in Washington state’s Residential Tenant-Landlord Act. Overall, the law requires landlords to maintain a clean, safe and sound structure for their tenants.

Mold, however, is only mentioned once. State law goes so far as to require landlords to provide tenants with information about the health hazards that may come with mold exposure. Condensation is typically understood as a tenant’s responsibility, while leaks or plumbing issues that cause mold fall on the landlord.

Bellingham established a registration and inspection program in 2015 for rental properties within the city limits. The city inspects most every rental unit once every few years, and the inspectors’ checklist includes practically everything, including the kitchen sink. Landlords will get dinged if a sink has leaks or drains slowly, or even if it has “concealed places for bacteria growth.”

Landlords will seemingly lose points for every imaginable problem — except mold. 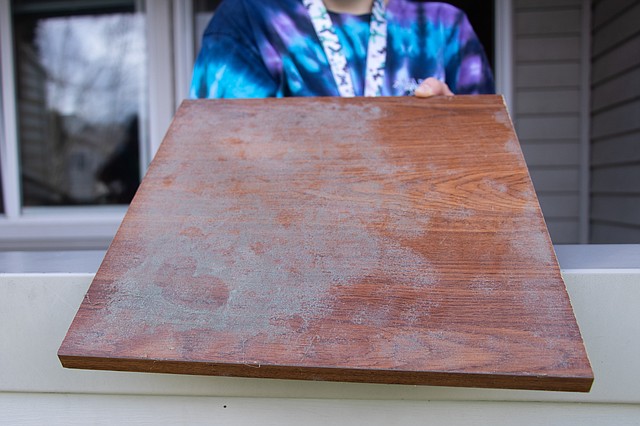 “Mold in and of itself is not an issue on our safety checklist,” city Planning Director Blake Lyon said in an email. “However, we do look for the underlying or root causes of mold such as, but not limited to, lack of ventilation, leaks, water penetration, etc.”

One of the most common problems inspectors find, Lyon said, is smoke or carbon monoxide alarms that don’t have batteries or are missing altogether.

A Bellingham renter, who asked to remain anonymous due to fear of retaliation, said when they moved into their Lakeway Rentals house, the smoke detectors were not working. They were also asked to sign a lease with an “as is” clause, but they were assured their issues would be addressed. “As is” clauses are not legally enforceable, according to Washington state law RCW 59.18.230.

Lakeway Rentals did not respond to multiple requests for comment.

Bellingham renter Aidan Ohls, 24, said when he moved into his Chuckanut Property Management rental last summer, rats were scurrying out of holes in the wall and floor. Maintenance men patched a few holes in the century-old house located near Laurel Park, and the rat problem waned.

As cold weather crept in, a new problem emerged. Ohls received an unusually high electric bill in November. Having lived through the bitter winters of Wisconsin while in college, Ohls weather-proofed the home, hoping it would make a dent in December’s bill.

Ohls and his girlfriend left town for four days over Christmas, setting the thermostat to 60 degrees.

When they returned, Ohls noticed ice on their windows.

“I had this moment where I stopped, (and thought) ‘I can see my breath in this whole house.’ Then I finally looked at our temperature gauges. One said 33 and the other said low. I then learned [it says low] if it’s under 30. That was in our bedroom,” Ohls said.

Ohls and his girlfriend cranked the heat up to 84, the highest it can go, and left. When they got back to the house the next morning, 14 hours later, the thermostat read in the low 40s.

Repairs generally need to be completed within 10 days after tenants put their complaint in writing, but certain fixes must happen more quickly. A defect that knocks out power, heat or hot water must be fixed within 24 hours.

The problem was not with the heat, but the structure of the house, Ohls said. It’s how Chuckanut justified their slow response despite state law also requiring a landlord to “maintain the dwelling unit in reasonably weathertight condition,” according to RCW 59.18.060.

Chuckanut did not respond to a request for comment. 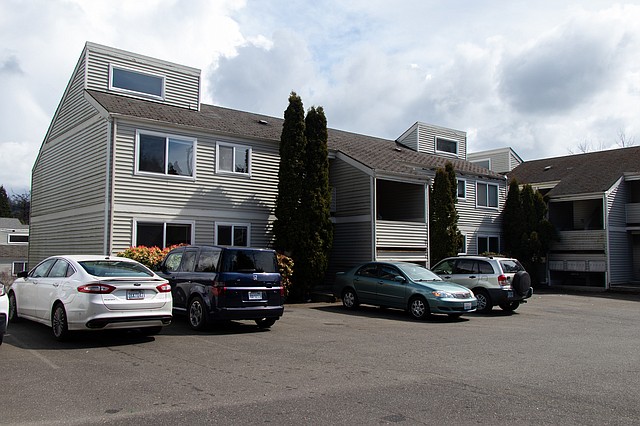 Sydnee Smith’s apartment complex, located at 927 22nd St. Past residents of the complex have also reported mold, including Bellingham renter Johnny Potter, who lived in the apartment from 2015 to 2017. (Kyle Tubbs/Cascadia Daily News)

Fear of retaliation from landlords prevents many tenants from exercising their rights or pursuing legal action, Villalba said. Fear of losing the property they apply for can also lead renters to sign a lease despite glaring issues.

“It’s such a tight market, people are not willing to risk it without already having found another place,” Villalba said.

From the start of 2016 to February 2020, when the city temporarily halted inspections due to COVID-19, about 20% of units failed a first inspection, Lyon said. In that case, a landlord has one month to address the findings before an inspector returns for a second look.

City officials aren’t inclined to levy penalties against landlords who fail inspections, preferring to educate them into compliance, Lyon said. If an urgent safety issue is being ignored, however, the city can tag a unit as unfit for occupancy until the problem is fixed.

Renters emerged as a political force in 2021. Initiative 1 on that fall’s ballot didn’t address health and safety issues directly, rather it aimed at putting the brakes on the city’s rapidly-rising rent costs.

“We do see a pattern and a practice of some landlords not doing repairs, not fixing issues in a timely way while they are able to charge higher and higher rents,” said Maya Morales, organizer with People First Bellingham, who ran the 2021 initiative.

Neglected repairs are an unpleasant side effect of a landlord-friendly market where the vacancy rate in Whatcom County is extremely low at 1%, according to a fall 2021 University of Washington apartment market report. A healthy housing market would have a vacancy rate around 5% to 7%, according to the City of Bellingham.

“It’s folks who are poor and working-class that lose out in that deal,” Morales said. “There are plenty of landlords who are self-righteous about it and see renters as money-making machines rather than as equal fellow human beings, who have just as much right to want to live well and safely.”