The flight of a disc

Disc golf has become a mainstay in Bellingham 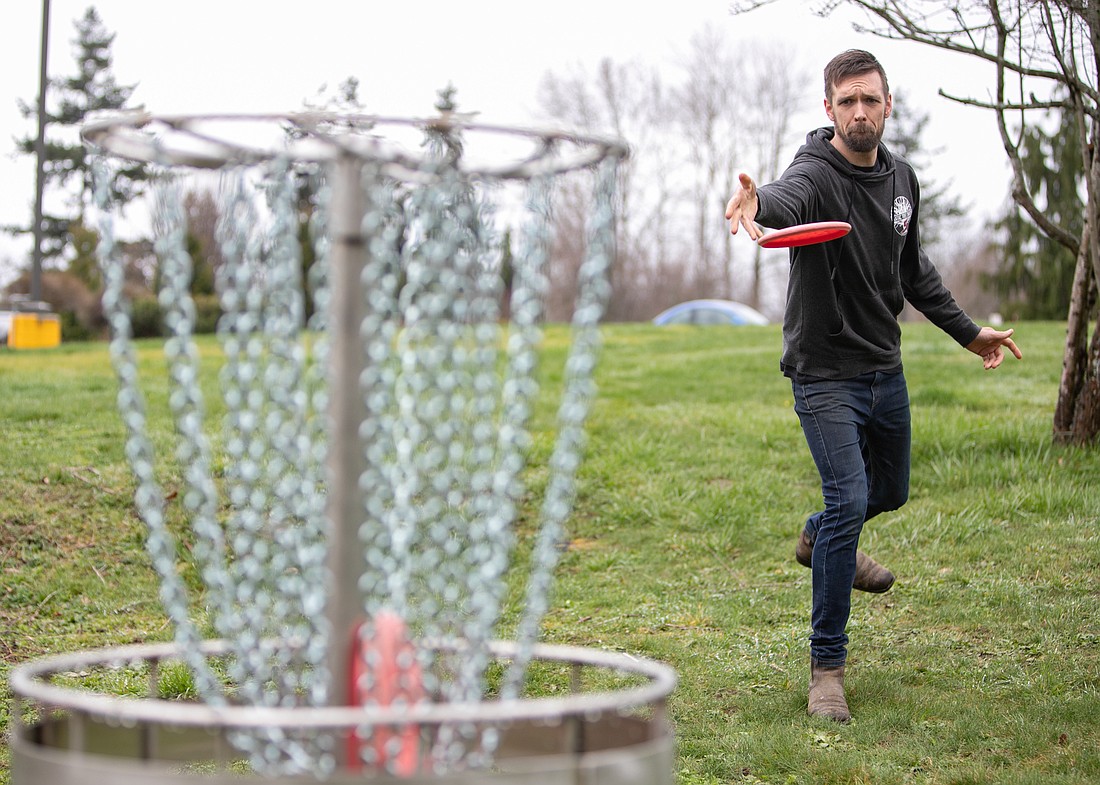 Kyle Miller throws a disc on March 22 into one of the baskets he handcrafted and placed on the Bellingham Technical College campus. Miller is a pipe-welding instructor and constructed the baskets out of scrap metal in the shop. (Hailey Hoffman/Cascadia Daily News)
By JONATHAN TALL
None

With or without a beer in the hands of players, disc golf is taking off and is expected to have a big summer in Whatcom, say members of the Whatcom Disc Golf Club, whose ranks have grown to around 400.

“Disc golf is a socially governed sport, its casualness also lends itself to casual play,” said Kyle Miller, a pipe-welding instructor at Bellingham Technical College who has been a member of the Whatcom Disc Golf Club since 2019.

Miller, 32, has been playing disc golf since 2008 when a friend introduced it to him. Neither of them fully understood the rules, but it wasn’t an obstacle for getting into it.

“Bringing a joint and having a beer with some friends is almost a part of the sport for a lot of people,” he said.

The man credited with inventing the game was Ed Headrick, former head of research and development for California-based toy company Wham-O. Southern California was a toy-making hub; Headrick invented the modern Frisbee after he was tasked with making use of plastic left over from the company's other hit toy, Hula-Hoops.

Disc golf, or “frolfing” as George Costanza referred to it in "Seinfeld," shares a clear lineage with golf. It is mostly a 9-hole or 18-hole game, with the goal being to throw a disc into a basket in the fewest number of tries. Like golf, the lowest score wins.

In its early days, it was mostly associated with hippies. Now, it’s a fixture around the country with over 6,800 courses registered on the Professional Disc Golf Association's directory. It’s especially popular amongst college-age kids looking to casually drink in the park, but disc golf's laid-back attitude extends to all age groups.

“I've played with plenty of people that just turn up once they get a buzz going,” said Jake Mallahan, who has been part of the Whatcom Disc Golf Club since 2016 and now serves on the board of directors. “When I was learning the sport, having a brew on the course was a huge aspect of it, but there's a time and a place for it.” 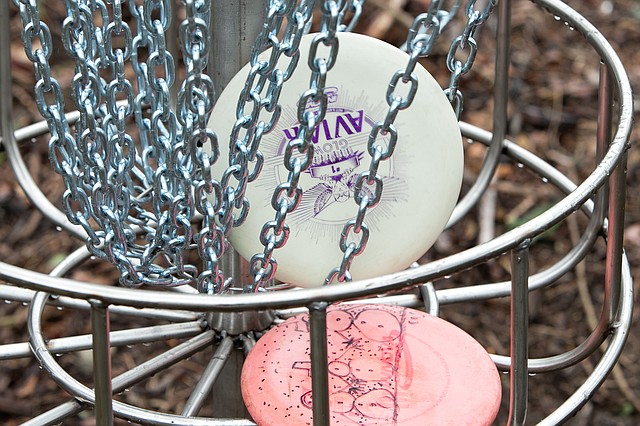 The casual nature of the game doesn’t make it uncompetitive. And better players are talented. Once the basket is located farther away, the skill it takes to ensure the Frisbee doesn’t veer completely off course becomes clear.

“It is both visually and quantitatively apparent when someone is doing something right and someone is not,” Miller said.

Miller recently participated in two qualifying tournaments so he could play in the National Amateur Disc Golf (NADG) Championships later this year.

Whatcom’s circuit has a mixture of casual and competitive events. Last year, six Bellingham players competed in the NADG Championships in Austin, Texas.

Whatcom Disc Golf President Bill Rink, one of the half-dozen locals who reached the 2021 amateur championships, began playing in 1999. At 59, he tries to play at least twice a week.

“My first tournament was the Cornwall Classic, it made me want to go try out other courses,” Rink said. “It's really enjoyable watching the flight of a disc, being able to control it and making it do what you want it to do and watching it fly, there's something about that.”

The Whatcom Disc Golf Club holds three annual tournaments: the Ice Bowl at Mossy Roc in Sudden Valley, the Battle by the Border at Lincoln Park in Blaine and the Cornwall Classic at Cornwall Park. It also holds a weekly doubles event every Sunday at Cornwall Park, which only becomes more popular as the weather gets nicer.

“Everybody wants to come outside when it’s sunny out, there are going to be backups around every hole,” Mallahan said.

Mallahan started playing when he was in culinary school in 2006. When the 31-year-old isn’t working as a solar panel installer, he’s tossing the discs.

“You get this itch after a while,” he said. “You get that one disc that just flies amazing for you and you want to have that again.”

Makeshift courses constructed by dedicated players can be found around Bellingham; Miller crafted several baskets out of stainless steel on the campus of the Bellingham Technical College. Being able to get some reps in while still at work is important to him as it's hard to find enough time to play between teaching and taking care of three kids.

“I am installing this campus course and making these baskets nice for the community, but I’m also 100 percent installing them for myself,” he said.

For Mallahan, part of the magic of the sport is being able to see other people find joy in the flight of a disc.

“I've been giving discs to random people around the park that I wasn't using just because I want to see them fly again,” he said. “It's a bug; you catch it.”

A previous version of this story incorrectly stated that there are 400 members in the Whatcom Disc Golf Club, when there are currently 670 members. The story was updated to reflect this change on April 3, 2022 at 8:02 p.m. The Cascadia Daily News regrets the error.